Elvis in Vegas: How the King Reinvented the Las Vegas Show 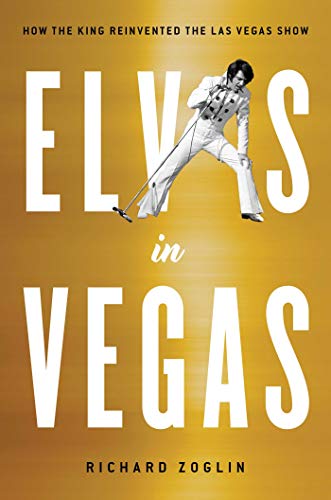 “Elvis in Vegas is a must-read for fans of Elvis and for all who are interested in the history of popular entertainment in America.”

On July 31, 1969, Elvis Presley, tired of making mediocre movies that no longer attracted audiences, opened in the 2,000 seat showroom at the new International Hotel in Las Vegas. The singer’s career needed a transfusion, and Las Vegas needed a changed in its diet of showgirls, crooners, and the Rat Pack. Elvis’s opening was a sensation, and over the next seven years he played over 600 sold out shows there. Elvis supplanted Frank Sinatra as the King of the Strip.

Richard Zoglin’s fascinating book, Elvis in Vegas, places Elvis’s Las Vegas years in the context of the history of entertainment in that city from the first nightclub in 1931 to the present. He describes the acts that dominated the big hotel nightclubs including Frank Sinatra, who first performed in Las Vegas in the early 1950s and ruled the Strip for decades, often with his Rat Pack cronies. He also discusses the enormous success of Liberace, Wayne Newton, a Las Vegas institution who has performed more than 30,000 shows from the mid-1960s to the present, and Welsh singer Tom Jones.

Zoglin is as interested in the musicians and entertainers who turned the smaller lounges into popular spots, from the first great lounge act, Louis Prima and Keely Smith. He also discusses the different styles of comics that opened for the singing stars.

The story of Las Vegas entertainment also encompasses the stories of the hotel owners and producers, from the mob bosses of the early years to the reclusive Howard Hughes and the more corporate types who rule the new Las Vegas. Unlike their mafia predecessors, the new entrepreneurs have been more interested in Las Vegas as a family-friendly entertainment center that as the “sin city” of an earlier era.

Presley’s 1969 success Las Vegas was quite different from his two-week engagement there in 1956. Then the high rollers didn’t know what to make of this new rock and roll star. Thirteen years later, Elvis knew what Vegas wanted and carefully crafted his act.

Zoglin tells how Presley, looking to develop a new onstage persona, sought advice in self-presentation from Tom Jones and other stars of the Strip. The author also shows how hard Presley worked to make his show musically powerful. He insisted on a 40-piece orchestra as well as a small rhythm section and both male and female backup groups.

There is another, sadder aspect of Elvis Presley’s tenure in Las Vegas. The singer declined from an artist keen to make his show the best in town to a sad, bloated, drug-addled caricature. His costumes became more garish, his performance much less disciplined. Like the Elvis imitators who became part of the Vegas scene, Presley became a parodic version of the star he once was and, for some, a symbol of the grotesquerie and gaudiness of Las Vegas itself.

Presley’s death in 1976 signaled the end of yet another era in Las Vegas history. The hotels have become more like theme park attractions. The star-studded shows of the past have been replaced by multiple, long-running iterations of Cirque de Soleil.

Elvis in Vegas is a must-read for fans of Elvis and for all who are interested in the history of popular entertainment in America. Zoglin has a lively style and his chronicle is generously documented.