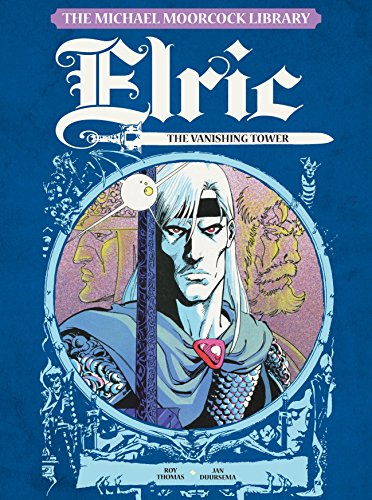 “this hardcover graphic novel collection will delight any fan of epic fantasy, and be a welcome addition gracing the shelves of the aficionado’s library.”

After losing his kingdom to his treacherous cousin Yrkoon and accidentally killing his beloved Cymoril in the ensuing battle, the albino Elric of Melniboné, bone-white of skin, silver of hair, crimson of eye, finds himself labeled Elric Kinslayer, and is exiled from the Dreaming City. “He curses the gods, but he knows that it is Elric of Melniboné himself who is truly cursed.”

Armed with the black sword Stormbringer, who draws the souls of those it kills into Elric’s body, filling him with more remorse for their deaths, the prince wanders the Younger Kingdoms with his companion Moonglum.

After crossing paths with the sorcerer Theleb K’aarna, assorted supernatural beings, and occasionally the Lords of Chaos themselves, Elric is whisked into another dimension. There he meets a past incarnation as well as a future version of himself and discovers that together, these three phases of the same man can do what only one can’t.

Within the confines of a few brushstrokes and the brevity necessary for this type of narration, the characters in these stories are well described and deeply defined.

A walking depository of guilt and self-condemnation, Elric is burdened by his accidental slaying of Cymoril, his consumption of the many souls Stormbringer gathers as it kills, and his inability to prevent his cousin from wresting power from him. Indeed, he carries the weight of the world on his shoulders.

Bombarded by visions, he sees a recurrent theme: “Two things all have in common: All are people whom Elric yearns to see once more, alive . . . and all are people who are dead, because of him.”

Elric is a self-fulfilling prophecy, for no matter the victory, he fully expects it to be stripped away. His own shame won’t allow him happiness, whether it is in love or triumph. Thus he always fails even as he succeeds, and he discourses on this at length, in flowery and often empurpled, prose.

“‘Elric cannot have that which he most desires. What he desires does not exist. What he desires is dead. All Elric has is sorrow, guilt, malice, hatred. This is all he deserves, and all he will ever again desire.’”

On the other hand, Moonglum is the voice of reason in Elric’s phantasm-laden realm. He expresses the worries of an ordinary person caught up in a world of fantasy, though he readily accepts its marvels. Intending to stick with Elric to the bitter end, he speaks his mind quite frankly, generally to no avail.

“‘I still feel your pursuit of this wizard is no more than a surrogate for real activity. You seek him merely for the trouble he’s caused you—and because you do not wish to seek your real destiny.’”

Elric himself can’t understand why Moonglum sticks with him. “‘I often wonder why you and I stay with each other. I wonder if you might not be better off if we went our separate ways.’” Moonglum answers. “‘Perhaps I stay with you for the same reasons you pursue the sorcerer.’”

The villains are truly villainous, laden with magical powers, and laughing egomaniacally as they are aided by a good many supernatural entities. No matter what their other aims, they all band together for one singular goal:  the death of the pale prince.

Though Elric welcomes this death, and sometimes almost succumbs, he always survives for another battle, as if part of his punishment is never to wholly succeed, but also never to completely give up. Instead, he simply lives to “fight another day,” much to his sorrow, though always to his expectation.

“Life is not bearable to Elric, slayer of Cymoril. He will try death, unless as sometimes it seems, it be denied him.  Gradually, as the hours pass, his sense of identity begins to leave him, as he prayed it would, and in doing so is united at least with the world which has rejected him, and which he has rejected.”

This dramatically illustrated graphic novel contains a continuation of author Michael Moorcock’s bestselling fantasy series, the saga of Elric, exiled ruler of Melniboné. With a script and adaptation of the stories by Roy Thomas, first successor to Stan Lee as editor-in-chief of Marvel Comics, illustrations by Jan Suursema and lettering by Tom Orzechowski, this volume comprises the complete six comics relating The Vanishing Tower tale. An extra feature following the story shows the original covers for the comics as sold on the newsstand, as well as a listing of the other entries in the Michael Moorcock Library series.

Between the sweeping, action-packed illustrations, and the heroic script, this hardcover graphic novel collection will delight any fan of epic fantasy, and be a welcome addition gracing the shelves of the aficionado’s library.