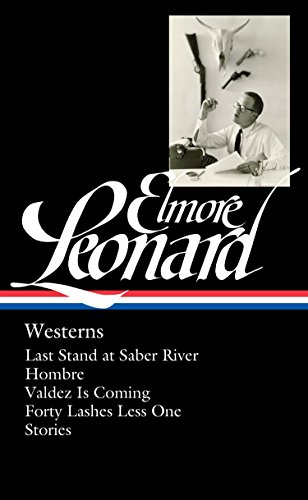 My great-grandfather, Chester Neuman, was a cowboy.  Family stories have him out on the range, in the rain, tending fences; they have him homesteading in Montana; they have him breaking horses for the US Army in the First World War.  He was a tall man, broad-shouldered and powerful-seeming even in his old age, always ready to praise the coffee he was served, no matter the taste.

He had the biggest hands you could imagine, but they always seemed restless in his lap. As though they longed for the feel of a rope or the muzzle of a horse. He grew flowers in his garden and, even though he’d attained the cowboy dream of hearth and home, he sometimes seemed a little sad. As though he knew that the Old West of his youth was now called the Old West because it was all past, because it was all over and done.

Elmore Leonard probably knew that, too. He probably knew it and felt the loss as keenly as my great-grandfather did. Which is maybe why his first efforts at fiction were westerns and why those westerns now stand apart from the typical genre offerings for their often solemn bearing and their sense of deeply-felt longing.

The Library of America, in bringing out Elmore Leonard: Westerns, ensures that the reader of this fine collection will be reminded of that not-so-long-ago past of horses and dust and folks out on the edges of things trying to make their way.  Reminded and entranced—again, or for the first time—by the dignity, power, and masterful narrative thrust that a simple cowboy story can attain.

Comprised of four novels and eight short stories written at the start of his long career, Elmore Leonard: Westerns is, nevertheless, a showcase for the author’s forthright style, playfulness, and dead-eye (or ear) for natural dialogue.

Each is a masterclass of tension and plot. And, while those plots tend toward the typical conventions of the genre—a man takes a stand, a man pays a price, a woman shows her strength—Leonard’s pacing, approach, and empathy with his characters is such that the reader is astounded by how fresh it all feels.

The four novels in Elmore Leonard: Westerns run the gamut of what we’ve come to know as the “Cowboy Story.” Last Stand at Saber River delivers just what the title promises, with an American Civil War veteran defending his spread in the waning years of the war, while Hombre is a stagecoach adventure with a hero Sergio Leone must have took notice of when crafting his Man With No Name films.

Valdez Is Coming, perhaps the strongest piece in the collection, is a tale of justice vs. vengeance vs. the worth of a man’s life no matter his color or social-standing, and the final novel of the book, Forty Lashes Less One, is a prison tale with a twist, set at the tail-end of the cowboy era.

The Library of America collection also includes eight short stories ranging from the famous (and twice-filmed) “Three-Ten to Yuma” to the short—but-sublime “Blood Money”—as much a treatise on fate and random chance as it is a story of posses and outlaws.

If the stories don’t thrill and resonate as the novels do, they do show Leonard at his narrative leanest and, as such, include some of his sharpest writing. Take the opening sentences of “Blood Money,” for instance: “The Yuma Savings and Loan, Asunción Branch, was held up on a Monday morning, early. By eight o’clock the doctor had dug the bullet out of Elton Goss’s middle and said if he lived, then you didn’t need doctors anymore—the age of miracles was back.”

I never knew my great-grandfather as any kind of reader. Tools, coffee cups, and sheaves of snapdragons cut from the garden of his little house on Pearl Street were better suited to his hands. But just the same, I’d like to think that, holding a volume such as Elmore Leonard: Westerns, his hands might not have been so restless. If only for a little while.

Award-winning fiction writer Lance Weller is the author of Wilderness: A Novel (Bloomsbury).