The ELLEments of Personal Style: 25 Modern Fashion Icons on How to Dress, Shop, and Live 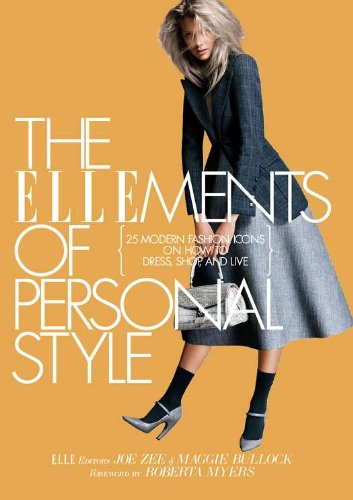 The idea that The ELLEments of Personal Style can be 90% devoted to starlets, singers, and famous socialites is just an excuse to pander to an under-30 readership. One might think that the mere selection of these “players” is even more ludicrous as so many are of barely legal age, not to mention that they all employ stylists to orchestrate their every appearance—nor have they acquired the know-how that comes with time and experience to develop a personal style, let alone be considered style icons.

If you consider this reviewer’s list of great “icons” as gospel then you will understand why the book’s offerings are meaningless. Fashion icons were/are devoted to the art of fashion and style; as well, they are educated and cultivated women of the world. Let’s say that it is difficult to compare Estelle, Milla Jovovich, or Lea Michele to any of the aforementioned grand women of style. If the intention was to glorify Elle magazine, then it would have been more appropriate to issue a supplement to the regular magazine than to have a book published under the pretense of offering up “modern fashion icons.”

That said, the photography is gorgeous and the physical quality of the book is something to be admired.
As is the case with so many journalists and editors of our times, their resumes span 10 years rather than the several decades of experience that would offer a far more studied evaluation. Without the past there can be no present, as there needs to be some legitimate basis of comparison to make valid claims. A list such as this cannot hold any gravitas in the world of fashion. What is even more offensive is who might be missing because of their age, such as Vera Wang, Tory Burch, Beyoncé, Isabella Blow, and others who have actually developed a sense of personal style.

It takes more than just acquiring some celebrity, borrowing designer clothes and jewels, having a hit song, or accumulating a few years of working experience to truly become a style icon.

Does this book aim to be taken seriously? Really?