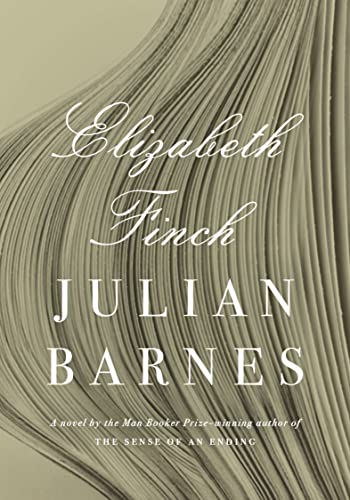 “novelists like Julian Barnes can make excellent theologians and philosophers.”

Elizabeth Finch by Julian Barnes resists traditional categorization. The tripartite work is a novel, history text, and philosophical and theological discourse, and yet functions as a beautifully rendered, thought-provoking, moving, and cohesive work.

The first-person narrator, Neil, relates the story of his enigmatic and inspiring professor Elizabeth Finch (referred to as EF by her students), who teaches an adult education course titled “Culture and Civilization.” The novel functions as a sort of homage or memoir to Elizabeth Finch and by extension, a reflection on culture, civilization, and Neil’s own life.

In Part I of the novel, Neil reminisces about his class with Elizabeth Finch, particularly the topics of discussion and her sharp insights and questions, his relationships with his classmates, and his friendship with EF. Although he and EF sustain a friendship long after the course ends, Neil knows little about her personal life. Much to his surprise, she leaves him her papers and books after she dies. While reviewing her notebooks Neil discovers references to J., whom he realizes is not a former lover of EF, but none other than Julian the Apostate, a historical figure described by EF as “the last pagan emperor of Rome, who attempted to turn back the disastrous flood tide of Christianity.”

Part II of the novel consists of Neil’s “essay” on Julian the Apostate, a make-up assignment of sorts for an uncompleted essay in EF’s class and as a tribute to her and her scholarly interests. Neil explains: “But to please the dead, this brings them to life again. Does that make sense? It was right that I wanted to please EF, and right that I would keep my promise. And so I did. And this is what I wrote.” The section is an exhaustive review of the literature on Julian the Apostate, ranging from the writings of early Christians to Ibsen.

Despite the fact that Part II reads like a history dissertation, it’s engaging and oddly fascinating. Neil peppers his discourse on Julian with commentary and ties his research on Julian to his “research” or curiosity about Elizabeth. For in many ways, to Neil, their lives are inseparable. Elizabeth’s personal life is indistinguishable from her intellectual interests, and Neil learns little about her personal life. He also realizes that writing about Julian is, in part, a sort of memoir about Elizabeth Finch.

The third part of the Elizabeth Finch returns to the present. Neil attempts to piece together EF’s life, only to wonder if “consistent narrative is a delusion.” While he has written something of a biography on Julian the Apostate and a pseudo-memoir on Elizabeth Finch, Neil has, moreover, learned how to live and think better. He realizes that EF left him “an idea to follow.”  Like his tale, Neil discovers that “a life, much as we would like it to be, does not amount to a narrative—or not a narrative such as we understand and expect.”

Author Julian Barnes, who perhaps not coincidentally shares the same name as Julian the Apostate, has written a playful, unconventional, heretical “narrative” about and not about the lives of the fictional Elizabeth Finch and the historical figure Julian the Apostate. As Neil observes, “theologians can also make excellent novelists.” And novelists like Julian Barnes can make excellent theologians and philosophers.