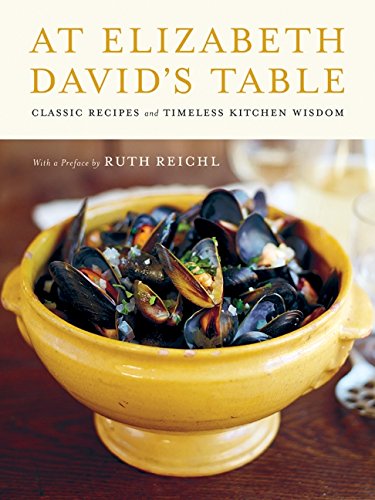 A contemporary of Child’s, Elizabeth David raised the food consciousness of the ration-weary and canned food-dependent British the way Child got us Americans to turn away from casseroles and make beef bourguignon instead. Yet oddly, neither is well known in each other’s home country. The old saw that the United States and Great Britain are two countries divided by a common language seems to hold true for cooking as well. With few exceptions (Nigella Lawson and Jamie Oliver among them), cookbook and food writers that are popular in the United Kingdom today are virtually unheard of by most mainstream Americans and vice versa. (Ever heard of Nigel Slater or Delia Smith, for example?)

If you haven’t heard of Elizabeth David before, it is high time you did.

Ms. David, who died in 1992, was one of the best food writers of the 20th century and her writing and cooking philosophy is as relevant today as it was when she began her career in post-war England.

At Elizabeth David’s Table is being published to coincide with the sixtieth anniversary of the publication of her first cookbook, Mediterranean Food, which went on to become a classic (along with some of her other works like French Provincial Cooking and Italian Food.) The anniversary seems beside the point, because in truth, now that we’ve all become better acquainted with Julia Child after a rash of recent books and a movie, it seems only right that we get to know her British counterpart.

This book is a wonderful sampler of some of David’s best food writing and recipes that cover all three of her regional cooking passions: Mediterranean, French, and Italian. Her approach to cooking is much more relaxed that Child’s so if you find the recipes in Mastering the Art of French Cooking to be too daunting, you will find At Elizabeth David’s Table much more approachable and considerably less time consuming. She does assume a basic level of cooking knowledge however, so if you are a novice in need of some hand holding, Julia Child is your source. That said, this is a book for every day cooks with recipes that are also dinner party worthy.

While Elizabeth David may be short on detailed instructions, she offers her readers an abundance of simply prepared food that emphasizes quality, freshness and above all, authenticity. Ms. David traveled extensively and she collected her recipes from real cooks in the countries she visited. The dishes selected for this book come from her body of work that is now 50 or 60 years old, and yet they have stood the test of time.

In this one volume you will find a handful of simple, classic recipes that every cook should have in his or her repertoire like quiche Lorraine, mushroom soup, Milanese risotto, rice pilaf, Bolognese sauce, roast chicken with tarragon, basic sauces, French chocolate cake, and yes, beef bourguignon. You might even find some new delights like Penne with Mascarpone that will become a new go-to meal when time is short and you need to get something on the table in a hurry.

All of the recipes are accompanied by enticing photos that show off the food’s homey, rustic appeal. Once you start perusing this book it is almost impossible not to get into the kitchen and start cooking. Sure, you may find that some of the recipes need a little tweaking, but Elizabeth David wouldn’t mind—she was less a slave to a recipe than the idea of the dish. In her introduction to her recipe for omelettes she writes:

“As everybody knows, there is only one infallible recipe for the perfect omelette: your own. Reasonably enough; a successful dish is often achieved by quite different methods from those advocated in the cookery books or by the professional chefs, but over this question of omelette-making, professional and amateur cooks alike are particularly unyielding. Argument has never been known to convert anybody to a different method, so if you have your own, stick to it and let others go their cranky ways, mistaken, stubborn and ignorant to the end.”

A cookbook writer with a wicked sense of humor is one you want to follow, and Elizabeth David had many followers. Looking through this collection it becomes apparent that her influence on the world of cookbooks and trends in cooking was profound. You could almost bet that it was Elizabeth David who started the risotto craze and several recipes like her Spinach with Golden Raisins and the idea of pork cooked with prunes sound very familiar from cookbooks that came along after her. Maybe it wasn’t Ms. David who first introduced these dishes to subsequent cookbook writers, but surely she was the first to include them in a cookbook outside of the countries where these dishes originated.

Whatever the case, it is somehow comforting to discover that dishes that Elizabeth David introduced to the world in the 1950s and ’60s are still being made.

And that is the point. Writing for The Spectator (a British magazine) in 1960, Ms. David encouraged her readers to give up cans, jars and prepared foods for something more authentic:

“Twenty years ago, during the war years, which I spent in the Eastern Mediterranean, I became accustomed to planning meals from a fairly restricted range of provisions. Now I find myself returning more and more to the same sort of rather ancient and basic foods. They suit my taste and they are the kind of provisions which will always produce a coherent and more or less complete meal which is just what haphazardly bought cans and packages won’t do.”

What’s old is new again. We like to think that the recent trend in both the U.S. and the U.K. toward seasonal, farm to table eating is a new invention, but when it comes to preparing simple, honest food, based on authentic recipes with fresh ingredients, Elizabeth David is ground zero. There is nothing particularly groundbreaking in this collection except that 60 years on, the words and recipes of Elizabeth David are as refreshing as ever.

At Elizabeth David’s Table is a must-have book for anyone who cares about good food and good food writing. And it will make you greedy for more.