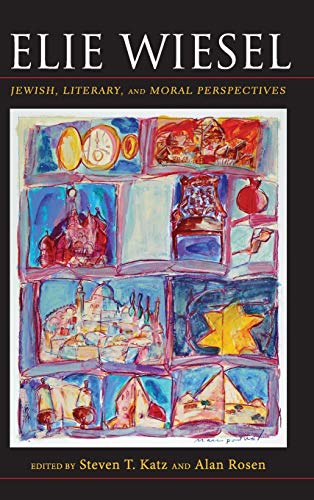 Noted Holocaust survivor Elie Wiesel is the gifted and prolific author of acclaimed novels, nonfiction articles, and fiction primarily concerning Jewish theology, life and his experiences in the Shoah. He is also a recipient of the Nobel Prize for Peace.

Elie Wiesel is a collection of 24 essays based upon Wiesel’s history and contributions as a student, teacher, author, Holocaust survivor, and public speaker. The authors delve deeply into Wiesel’s mind through his various writings about Hassidic life, the Talmud, historical perspectives on various Jewish laws, and commentaries by famous rabbis.

Within this book, prominent scholars in the fields of Biblical, Rabbinic, Hasidic, Holocaust, and literary studies offer fascinating and innovative analyses of Wiesel's texts as well as enlightening commentaries on his considerable influence as a teacher and as a voice for human rights.

By exploring the varied aspects of Wiesel's multifaceted career—his texts on the Bible, the Talmud, morality and Hasidism as well as his literary works, his teaching, and his testimony—this thought provoking volume adds considerable depth to our understanding of his impact.

Many of us have read most of Wiesel’s fiction. These books deliver revealing insight into the Holocaust, prejudice, and Middle East conflicts through impressive dialog and unforgettable characters; however, it is between the detailed lines of his nonfiction that we learn the most about Wiesel the man and perhaps more importantly his view of Judaism.

He opened his life to us in his recent nonfiction account Open Heart (reviewed here). Now his thought provoking analyses of Judaic texts, Talmudic canon, and rabbinical deconstructions come to life through distinguished academics in Elie Wiesel. These authors examine Wiesel’s writings from religious, political, humanitarian and social perspectives. Through them, we learn about Wiesel’s love and respect for Judaism, Hassidism, the Talmud and the Torah.

We learn that Wiesel’s relationship with the Holocaust represents only a small part of his extraordinary life and contributions to society, and that his impressive command of Jewish liturgy delves far beyond the borders of the Shoah.

Central to the beliefs of Hassidim is the shared relationship with God and the coming of the Messiah. With Wiesel, these beliefs were summarily shattered by the Holocaust and then gradually rebuilt with the reincarnation of the State of Israel.

Perhaps unlike Primo Levi, who was never able to shed or learn to live with the horror of the Shoah (pushing him eventually to suicide), Wiesel’s ability to teach students and educate the public, along with his unfettered love for Israel saved his belief system. Wiesel became the world’s historical consciousness related to genocide, a role he could hardly have anticipated or desired prior to the Holocaust.

This book reveals Elie Wiesel’s towering intellectual capacity, his deeply held spiritual belief system, and the depth of his emotional makeup. Through learning, listening and teaching, Wiesel was able to survive horrendous genocide and brutality and then thrive as a writer, teacher, and public speaker. He lost almost all of his family and friends, as did virtually every Holocaust survivor. Yet, he was able to dispatch his emotional trauma and in the process give the world beauty, vitality, and incredibly relevant lessons on Judaism and life.