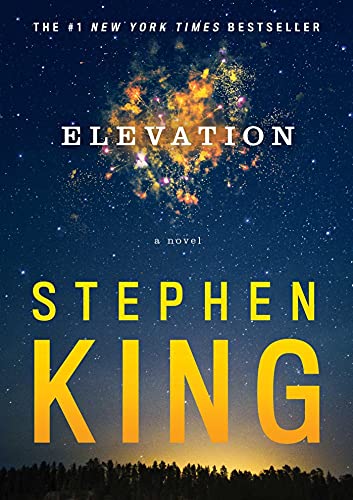 It seems everyone is on a diet, but what about those who aren't, yet are dropping pounds? This is the predicament baffling Scott Carey. Every time he steps on the scale, he weighs less. He is in excellent health and isn't dealing with cancer, which is a common symptom of unexplained weight loss.

Scott contacts Dr. Bob Ellis, a retired physician in his town of Castle Rock, Maine. Elderly, yet sharp, Dr. Bob cannot believe what he is witnessing. In his mind, Scott looks to be at least 20–30 pounds heavier than what shows, but when Scott dons his heavy boots and jacket weighed down with coins, it displays the same poundage as without his clothing. How can this be explained?

Confused, Dr. Bob suggests Scott contact a specialist, which he rejects. He does not want to be tested like a lab rat. He begs Dr. Bob to keep this private and agrees to report any other changes.

Scott, recently divorced, is in a slump with only his feline Bill D. Cat as company. With a lucrative assignment designing interlocking websites for a department store, he works from the comfort of his home and does not deal with anyone.

Unfortunately, a confrontation arises with his new neighbors—a married lesbian couple, Deirdre and Missy, whose canines use his front lawn to do their business. He complains about this to Deirdre, who is defensive and tells him she doubts his accusations. Deirdre questions Scott as to his grievances, charging him with being prejudiced against same-sex marriages, which couldn't be further from the truth. Now Scott is prepared to prove his allegations:

"He was in time to see 'the ladies,' as Doctor Bob had called them, coming out of their driveway and turning onto View Drive, long legs flashing beneath tiny shorts—blue for Deirdre Macomb, red for Missy Donaldson. They were wearing identical tee-shirts advertising their restaurant they ran downtown on Carbine Street. Following them were their nearly identical boxers, Dum and Dee . . .

". . . Scott made a sudden decision and hustled back to his study (taking a nimble leap over Bill, who was reclining in the hall), and grabbed his tablet. Running back to the porch, he opened his camera app. . . .

". . . First one of the boxers swerved, and then the other followed. Dee and Dum ran onto Scott's lawn and squatted side by side. Scott raised his tablet and snapped three quick photos."

Another meeting brings additional hostility when Scott confronts Deirdre with the pictures. In her mind, his complaints aren't about the dogs, but with her sexual preferences. In this close-knit town lesbians are frowned upon, and now the couple is finding out just how much with the upcoming demise of their eatery.

The following conversation by a resident with Scott shows King using his Republican Conservatism to make a point, which should not be a political consideration in the scenario and may be off-putting to some:

". . . Conservative Republican. The county went for Trump three-to-one in '16 and they think our stonebrain governor walks on water. If those women had kept it on the downlow they would have been fine, but they didn't. Now there are people who think they're trying to make some kind of statement. Myself, I think they were either ignorant about the political climate here or just plain stupid."

Scott determines to be a good neighbor and challenges Deirdre, an Olympic contender, to a competition in the local 12K Turkey Trot. She sizes him up and laughs taking in his considerable paunch and age, though she accepts his offer. The two run neck-and-neck and as race commences with a horrific thunderstorm as they near the finish line, Scott surprises the onlookers by his actions. The contention between the women and Scott turns into a friendship. Only King can pass off such a far-fetched and unlikely set of affairs.