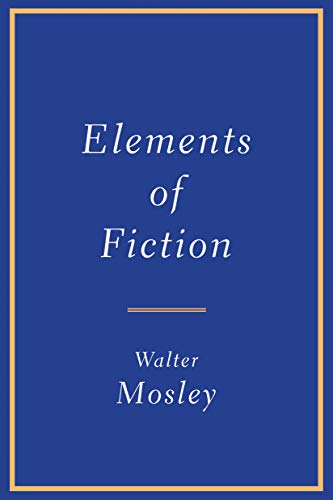 “The challenge of making something from almost nothing is met by using the right words ‘frugally, parsimoniously.’ With the right words we can make the reader go places he could never imagine, because we have paved the way.”

Walter Mosley’s concise and entertaining primer proves the point that you can’t teach writing. You can teach the finer points of the craft and even the art of rewriting, which Mosely doesn’t shy from admitting are both hard work. But how to make “something from almost nothing” remains a mystery. How can fiction writing not be?

Mosely is the prolific author of 50 books that include the Easy Rawlins mystery series. Elements of Fiction can be looked at as a follow up to his earlier quick promise, This Year You Write Your Novel. Would that were only true. Still, he does offer a welcome voice of encouragement to writers at any stage of their career.

The book lacks a table of contents, a curious yet perhaps fitting omission given “the non-linear relationships of the elements of fiction.” Mosley gives readers a series of very short chapters of only two to four pages each that touch on topics that vex every writer. Perhaps this approach is what led him to call the book “an essay.”

Some of those topics include the structure of revelation, the blank page, context, character development, character relationships, narrative voice, physical descriptions, emotional descriptions, and describing an idea. Discussions of these can easily become abstract in the hands of lesser practitioner.

Mosley likens character, for example, to a journey because “every important player moves within and is transformed by the story told.” Well yes, but how do you convey that on the page? Mosely helpfully invents a romance story to show by example how characters grow, diminish, and are transformed.

The challenge of making “something from almost nothing” is met by using the right words, we learn, “frugally, parsimoniously.” With the right words we can make the reader go places he could never imagine because we have paved the way. He speaks of condensation, “a major unspoken element of fiction writing,” boiling down material to only those elements salient to the story. You have to do it all with only words and “a smattering of punctuation.” In the end, the subject is inexhaustible.

Tidbits of advice sprinkle these pages: Failure is an essential raw material from which our stories arise; the blank page is the writer’s friend; plot is the prism through which the story is revealed; readers are mainly interested in what happens next, and how does it end; a novel doesn’t happen in alphabetical order.

While rewriting is an arduous task, “the beauty is that you can go back and make the changes that will be everything you meant to say and not one word you didn’t.” Still, he makes writing sound like an occupation that isn’t for the faint of heart.

At the very end Mosely gets a bit loosey-goosey in a synesthetic barrage of emotion, poetry, and aphorisms. Fortunately, the book ends there. His purpose, he reminds us, is to show by example how deeply writer can go into their own mind. And in this, he fairly well succeeds.