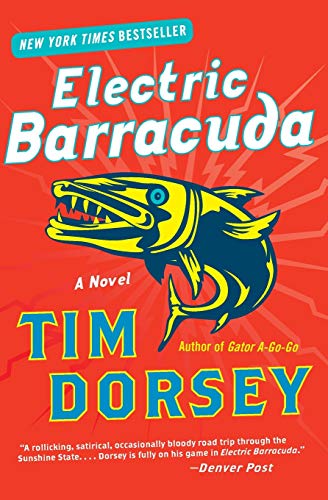 Successfully mixing two genres—comedy and crime—is a daunting task, but talented writers, like Tim Dorsey, manage to accomplish what readers seek in the mixture of the two.

Dorsey’s latest, Electric Barracuda, is a package of comedy wrapped in a criminal plot that races, staccato-paced and with nary a pause, to the bitterly funny end. Readers who enjoy comic crime will laugh at some of the sinister shenanigans and guffaw at more. But reader, beware: Dorsey unleashes a vivid and brutal imagination—indifference, torture, murder, slow painful deaths, maiming, and such bloody the pages. Electric Barracuda is not for children—unless that child is studying to be a terrorist.

Serge Storms, the main character (also the protagonist in some of Dorsey’s earlier books) takes on several eccentric projects, all involving death and traveling here and there through Florida. Serge blogs (and dreams) about founding a tour for visitors who yearn for the fugitive experience. He also wants to find the stash that his gangster grandfather supposedly buried. And there’s more: Serge also tries to trace Al Capone’s alleged activities in Florida, circa 1929.

Readers familiar with Dorsey’s work will be happy to immerse themselves in Serge’s inevitable involvement in mayhem and murder. Dorsey concocts a lowlife load of hideouts and hangouts like the Nu Bamboo (fans might recall the old Big Bamboo tavern), weapons and wild women, decaying Everglade swamps, and highways and roads in various states of disrepair as Serge and company race to the next kill.

Serge manages escapes worthy of Houdini, invisibility in plain sight, complex tricks, and especially frantic chases at the wheel, hubcaps flying, on The Loop, the wild path through the Everglades.

Chases involve planes and especially automobiles as means of insanely out of control—in Serge’s hands—transportation. But the frantic chases are only one of the author’s wacky devices. Another is Serge’s passion for classic mystery movies, as Serge says “that uniquely American genre: the Great Chase Movie.” He attempts to replicate the timbre of many classic crime films such as Total Recall, Notorious, The Big Sleep, and especially, The Fugitive. Serge’s references to these modern classics immerse the reader in the inherent darkness—albeit humorous—of these films.

Characters’ foils work humorously in Barracuda, and are often needed as comic relief after encounters with gruesome scenes. Serge, the maniac, has a perpetually drugged or drunk sidekick, Coleman, while the primary detective, White (who is black), has an inept partner, Lowe, who is not only low, but slow. A “bookend” adds to the book’s structure: Dorsey introduces the characters early by listing the various criminals, sidekicks, and helpless lawmen, and then writes them out at the end—if they are still alive, that is. It’s tons of fun.

Dorsey’s work is much like that of Carl Hiaasen, another master of comic crime novels that satirize Florida. But Dorsey’s drumming pace leaves no time for the reader to digest details, while Hiaasen’s books let the reader breathe between violent episodes and, perhaps more importantly, create time for a little character development, or even to foreshadow a future fiasco or a possible romance. Compared with other successful comic crime novels, Dorsey is, perhaps funnier to violence lovers, but his work is also more mean-spirited than most.