Eleanor in the Village: Eleanor Roosevelt's Search for Freedom and Identity in New York's Greenwich Village 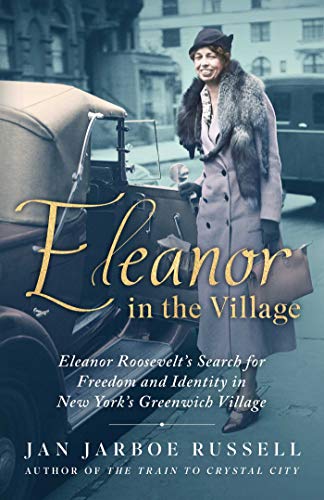 Eleanor Roosevelt was a transformational figure for generations in the US and around the world. As activist, writer, itinerant diplomat, and quiet council to Franklin Delano Roosevelt, she helped lead the country through the Depression and WWII.

Biographer Jan Jarboe Russell’s slim biography of Mrs. Roosevelt focuses on her short but defining time she spent in Greenwich Village in the ’20s, where she kept an apartment to explore her interest in all sectors of society, as well as her emotional and sexual freedom away from politics.

Eleanor was a most public, yet very private, and lived her own uncompromised life when sexual scandal could have ruined her. Susan Quinn’s 2016 biography Eleanor and Hick details her long-term relationship with Lorena Hickok, the first hard newswoman reporter in the US for the Associated Press. And their relationship is touched on in Russell’s book, along with Eleanor’s other lovers, both female and male.

Through the FOIA, it has been revealed that FBI director J. Edgar Hoover’s files on Eleanor ran thousands of pages, so she had to know Hoover could try to harm her politically whenever he chose to. Eleanor’s standing in the country and world, as a woman of the people and a humanitarian around the globe earned her unprecedented respect around the world.

Eleanor moved to the Village when Franklin was governor of New York, after she had discovered his longtime affair with Lucy Mercer. Eleanor and Franklin had five children, and despite their essentially living separate private lives, she remained devoted to her husband emotionally and was an unwavering loving mother as well.

In contrast, her own childhood and her relationship with her own mother was full of heartbreak. She grew up in a wealthy family but her mother basically treated her with contempt, even making fun of the way she looked. Her father, though, was completely devoted to her and told her always that she was beautiful. Unfortunately, she had to witness him slip into severe alcoholism. He died when Eleanor was 10, and she was not permitted to go to his funeral.

Eleanor was also isolated at a private school, where she was made to feel like she didn’t fit in, and she further withdrew into loneliness. Her father’s sister, her Aunt Bye, rescued Eleanor from this sad life and arranged for her to go to France to study at the famed Les Roches in Fontainebleau, near Paris, run by noted feminist Marie Souvestre, where Eleanor was not only in a welcoming environment, but flourished emotionally, socially, and academically. On balance Eleanor’s excursions in gay bohemian in Greenwich Village was a short episode in her long life, but as Russell details, it was essential to her world view to work toward a more equitable society and system of government. She was just as concerned with marginalized urban neighborhoods as she was about poverty in the mining towns in the Appalachian Mountains.

Eleanor worked hard for racial equality and women’s rights. She used her position and influence for the public good of all Americans. She inserted herself in the politics of the presidency at crucial moments. She counseled FDR on proacting initiatives in education, medicine, and international diplomacy, and her fight for civil rights for African Americans, and her pivotal role in forming the United Nation and global humanitarian work continues to inspire.

Sketchy in parts, Russell fills in some vital history that adds to Roosevelt’s legendary life. Russell’s triumphant short chapters of her time abroad and her time in the Village (The Making of a Heroine) are both moving and beautifully observed. As is the account of Eleanor’s devotion to Franklin during his physical recovery and political resurrection becoming the democratic nominee for president after his debilitating illness made the prospect seem unattainable.