El Sicario: The Autobiography of a Mexican Assassin 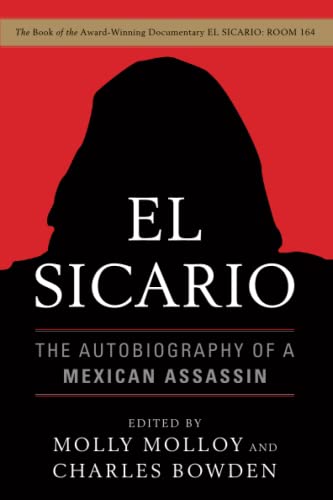 If you or family members are contemplating a trip to Mexico you may want to rethink your plans. El Sicario: The Autobiography of a Mexican Assassin graphically illustrates the violence that has seized that nation.

The book is adapted from the award-winning documentary El Sicario: Room 164, in which the author and a translator are given a firsthand account of what it’s like to be a hitman in one of the most narcotics ridden countries in the world. In this unprecedented face-to-face encounter, filmed in the same room where El Sicario performed one of his many murders, he describes horrific practices that characterize the life of a narcotics assassin in places such as Juarez and Chihuahua, Mexico. Speaking with a shroud over his head and his voice disguised so as not to disclose his identity, the fugitive describes his life as a paid killer.

What may shock readers more than the murders, kidnappings and torture vividly chronicled in El Sicario, is the fact that much of the government in Mexico is complicit in these practices. Indeed, the hitman himself was a member of the police force, one of the recruits routinely chosen during their police academy training to become an assassin. Moreover, he was later trained by the FBI in Tucson in the art of tracking people and the use of firearms. Our tax dollars being in spent in Mexico in the form of aid to the military and police have a hand in perpetuating these narcotics driven murders that have become mundane by the fact they are occurring so often.

We hear much about the war on drugs and how the traffickers are bringing much of the drugs into the United States. But we hear very little about the casualties that result. One chilling statistic quoted in the book: In Juarez, 3,111 people were murdered in 2010. Many of those murders were committed by the police and military. El Sicario goes into much detail about how police officers murder those who would encroach on another dealer’s territory, or skim funds or drugs from a drug shipment. He describes how the police act as bodyguards for top echelon traffickers, and how the police do all of these things while wearing police uniforms and using police vehicles. Not surprisingly, the army has become a component of this corruption, informing the drug lords about drug shipments that pass through their checkpoints.

The fact that the drug business is a huge source of income for all involved does not go unnoticed by elected officials or those sworn to enforce drug laws. At almost every level of government there is corruption and cooperation with the criminal element. Men join the police department knowing that the annual salary is a mere pittance, but they can make a fortune by assisting the drug lords. Citizens quickly scatter when the police arrive since they know that many officers are criminals themselves. How far reaching is the influence of the Mexican drug lords? El Sicario contends that it may extend to even the President of Mexico himself—or at least to those in his office.

El Sicario, now a nomad afraid of both the authorities and the traffickers (is there a difference?), tells his interviewers that he has become a Christian. As such he can no longer condone the actions of those who kidnap and murder. He explains that he has been saved, and despite his twenty years spent working as a contract killer for the Mexican drug cartels, he says he is happy and at peace.

The book, adapted from the award-winning documentary that was shown on French and German television in November 2010, should serve as a wakeup call to our own lawmakers, causing them to rethink the tax dollars sent south of the border each year. While there is no definitive way to verify the authenticity of what this outlaw recounts, there are enough details which are singular in nature that only someone who has been involved in the chilling activities would know. Mr. Bowden and Ms. Molloy sat down with a monster—yet lived to tell his story.