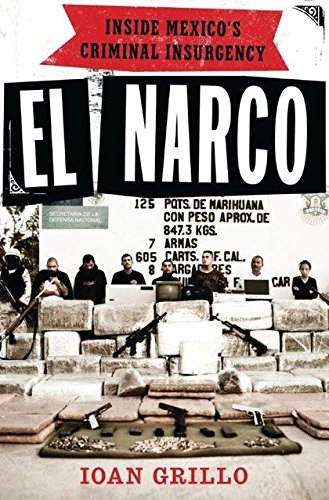 “El Narco is a seminal text . . . For those looking for a good read from an unaltered man, plow into this one while you are under this influence of your legal beverage of choice. A toast to Ioan Grillo and his spellbinding El Narco.”

Warning: Absorbing the pages of this thriller may feel like you have digested a “Rolando” (the heroine crack sandwich from page 101), while the real life depictions of horror may cause queasiness and contribute to addiction.

Ioan Grillo has created a masterwork of who’s who in the drug war in North America. Brimming with detail, El Narco demands a thoughtful read, with periods of rest from the brutality of the illegal drug industry’s casualties. This book is a must read for anyone in law enforcement, public policy administration, and politics.

Mr. Grillo’s assertion that politicians are at a loss for words to even describe the south-of-the-border conflict exploding in Juarez, Mexico City, and Tijuana is aptly depicted with the Wiki leak by Secretary of State Hilary Clinton who said that Mexico has an insurgency akin to Colombia’s. This is underscored by Mr. Grillo’s quote of a Pentagon analyst’s warning that “Mexico is in danger of a Yugoslavia-style rapid collapse.” One of the distinguishing characteristics of the Mexican drug war is the gangland slaying of 2,200 public officials as of this publication.

There is so much action packed into this book, the hard copy is recommended so you can highlight, underline, and make notations for future reference over and over and over again.

El Narco is a seminal text on the complex relationship between the United States DEA, federal government, U.S. military, elected officials, and their counterparts in Mexico. When peeling back page after page of this spellbinder you will find elected officials duct taped and blind folded or serving as puppets to various terrorist drug regimes. Fearless Mexican officials are murdered or missing with impunity, to say nothing of the slaughter of innocents in the turf war for control of the drug trafficking lanes.

For the local neighborhood toughs, try tattooing Blancornelas on your cojones for your courage stamp, as this famous reporter took four slugs, and lived to make this proclamation, “El Narco used to be in certain states. But now it has grown across the whole of the Mexican Republic. Soon El Narco will knock on the door of the presidential palace. It will knock on the door of the attorney general’s office and this will present a great danger.”

Mr. Grillo is not without humor, as exhibited in this quote about how the Colombians lost the drug trade to Mexico, “The Colombians never quite got it; they always played checkers and never really played chess. They never really thought two steps ahead.”

To his credit, Ioan Grillo doesn’t just focus on the prurient aspects of drug trafficking, but manages also to illuminate some potential cures for the disease of illegal drug cartels, citing some successful international remedies.

The policy implications for restoring civilian safety in our hemisphere impact drug enforcement spending at the federal, state, and county level, because it isn’t just the guilty that are purged in this war.

Public health implications include the reduction of HIV infections and Hepatitis, as demonstrated by Holland and Portugal, through legalizing, taxing, and controlling drugs by their governments.

At the moment, 13 states have decriminalized the possession of personal amounts of marijuana. Mexico has decriminalized the personal use of almost all narcotics, which allows the police to focus on the cartels and not their customers. Governments across the United States are straining with their fiscal budgets and decriminalizing small drug use has freed space in the prison system for the real criminals that are a threat to society.

One of my favorite moments in Mr. Grillo’s opus on the drug war in North America is his criticism of The Rand Corporation’s rather lose calculations on the size of the American and California marijuana market.

Good for Mr. Grillo—clearly his cojones are intact. For those of looking for a good read from an unaltered man, plow into this one while you are under this influence of your legal beverage of choice.

A toast to Ioan Grillo and his spellbinding El Narco.