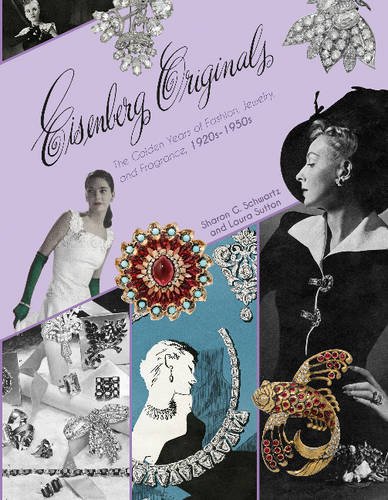 Sharon Schwartz and Laura Sutton have bestowed upon fashion readers a book that few could find fault with; Eisenberg Originals is the story of the Eisenberg family and the legacy that they created that has since been nearly forgotten except in the most rarefied circles of fashion.

This reviewer was engaged, impressed, educated, and entertained by what Schwartz and Sutton proffered in the form of Eisenberg Originals. Even the most jaded fashion reader will find information that he or she was not previously aware of. For example, Eisenberg was prescient enough to have created a mini conglomerate way before anyone ever even dreamed of such a thing. They singlehandedly became a brand with contiguous products that spoke to their ever-growing client base.

Those of us who have a reasonably good memory or a varied knowledge of fashion will recognize the name as it was most ubiquitous as “Eisenberg Ice,” which was its jewelry brand; but what most may not know is that Eisenberg started as a dress manufacturer, which spawned the birth of his fashion jewelry business. The authors have researched and documented the empire that was Eisenberg as well as educating the reader on the fine points of costume jewelry within an independent manufacturing business. While the praises of the Eisenbergs are sung loudly and proudly, what strikes one is the genius that belonged to Esinenberg Originals, the dress business that started it all.

Designing clothes, especially dresses, requires a skill that can be thought of as akin to being an architect. The original Eisenberg frocks sported the ornamentation of rhinestone clips and pins, but what must be considered is the weight of these pieces and how the dresses had to be engineered to support them. Mastery is required to pull it off successfully.

The upshot of all this makes Eisenberg Originals a must read on so many levels. There are few brands of that era that can match or boast of their accomplishments, and there are fewer books that glorify one of the great pioneering businesses of 20th century American fashion.