The Eighth Sister: A Thriller 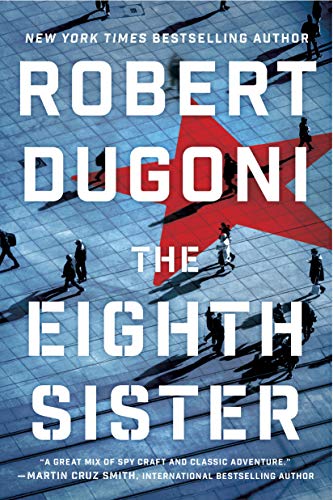 “The perfect pacing and brilliant intrigue of The Eighth Sister result in a page-turning, intelligent tale that will keep readers engaged until the very last page. . . . the perfect combination of espionage, history and quick-witted characters—a rare feat in the thriller genre.”

Robert Dugoni, renowned author of the Tracy Crosswhite series, scores big with his new standalone espionage thriller starring former CIA case officer Charlie Jenkins. In his twenties, Jenkins worked for the CIA in Mexico City and left the agency on a sour note due to its mishandling of one of Jenkins’ cases.

Fast forwarding 40 years, 64-year-old Charlie is married with a nine-year-old son and a baby on the way. He and his wife own a security company, CJ Security, that provides services to a Seattle-based investment company entitled LSR&C.  Recently, LSR&C has ceased making timely payments to CJ Security, and Charlie worries that his company may face bankruptcy or default on numerous loans. A savior arrives in the form of a CIA agent who worked with Jenkins in Mexico City, Carl Emerson, who offers Jenkins a significant payout if Jenkins commits to one final CIA mission in Russia.

Focused on his financial insecurity, Jenkins fails to question Emerson’s timing and agrees to the Russian mission which involves a highly clandestine CIA operation called The Seven Sisters, seven Russian women trained from childhood to infiltrate Russia and garner intelligence for the United States. The term the Seven Sisters is paying homage to seven buildings built by Stalin following World War II to highlight and showcase Soviet preeminence and impress its Western enemies.  Jenkins’ mission entails locating an eighth sister, a counteragent activated by Putin to locate the original seven sisters.

While his first trip to Moscow goes smoothly, Jenkins’ second trip falls apart almost immediately upon his arrival, and he begins to question the existence of the alleged eighth sister. The hotel does not have his reservation, his Russian contact detains him, and he finds an assassin hidden in his hotel room closet.

Teaming up with another agent, Jenkins embarks on a lengthy mission to escape Russia before he is captured. Dugoni includes several clever twists and turns, and while it is a bit lengthier then it needs to be, Jenkins’ attempted escape is highly entertaining and serves as a crash course in Eastern European geography and modern-day spy technology.

The perfect pacing and brilliant intrigue of The Eighth Sister result in a page-turning, intelligent tale that will keep readers engaged until the very last page. Dugoni mixes humor, culture and history in equal measure creating a powerful and timely tale. He also proves that Russia remains a pertinent and credible foe for the United States, especially with Putin’s rise to power.

Dugoni’s exhaustive research, detailed in the Acknowledgments, constantly shines through the tale and imbues the mystery with genuine credibility and an added layer of authenticity and realism. Modern-day Russia, and Moscow specifically, is a work in progress. When Jenkins attempts to walk back in the subzero weather to the Metropol Hotel, an ambulance stops to pick him up. Initially, Jenkins believes that the driver’s motive is altruistic until he asks Jenkins for “‘forty American dollars.’ Jenkins had read that Moscow vehicles of all types—even hearses and garbage trucks—were picking up pedestrians. In a city where so many struggled to make ends meet, every ruble helped.”

Particularly fascinating are the details about the Hotel Rossiya, the hotel that housed all foreigners during the Soviet reign. Once socialism collapsed, a new owner sought to renovate and reopen the hotel, but upon beginning construction, he discovered that the walls contained cameras, listening devices, and pipes to distribute gas to the rooms. In an effort to keep that information secret, Putin allegedly forced the owner to tear the building down. The author includes numerous other little-known historical tidbits and highlights the long-term impact of Communism and Russian rule on its citizens’ psyche and culture.

The Eighth Sister is the perfect combination of espionage, history and quick-witted characters—a rare feat in the thriller genre.