The Eight Mountains: A Novel 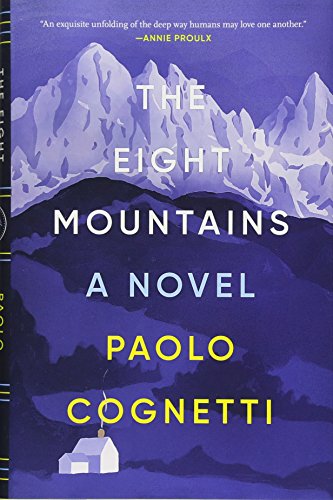 Coming of age stories seem a dime a dozen these days, which is why it takes a particularly striking novel to catch the eyes of readers. Enter Paolo Cognetti’s debut novel, The Eight Mountains.

The novel follows young Pietro along on his arduous, even perilous journey in the foothills of Monte Rosa, Italy. Pietro tackles the mountain range with his father who appears to be just as unyielding and proud as the mountains they traverse. These mountains quickly come to embody the tumultuous path a boy has to take to become an adult. Therefore, the metaphorical meaning and strength of these natural structures quickly become clear to the reader.

But the novel would not have packed the punch that it those had these mountains solely served a metaphorical purpose. Pietro’s confrontation of the physicality of these mountains, his need to traverse and overcome them call to mind some sort of tribal rite of passage, as well as a mythological odyssey.

In fact, Pietro’s journey seems to bear an eerie resemblance to that of Ulysses. The only real difference is that Ulysses’ father wasn’t among his companions in the Mediterranean; however, considering the fact that Ulysses’ son Telemachus is eventually set on a quest to find his father, even this difference can be worked around.

The Odyssey-like feature of the novel only grows stronger as the novel progresses. Perhaps this effect is augmented by the fact that the narrator is Pietro in his thirties, looking back on a time of trial. What really stresses this effect, however, is Pietro’s relationship with his father.

Pietro’s father is blatantly in love with and in awe of Monte Rosa. His admiration of the mountain range is displayed again and again throughout their journey. Pietro, however doesn’t share his father’s enthusiasm. The differences between father and son create a disconnect between them.

This may, at first, seem very typical. After all, don’t most boys grow apart from their fathers at this age? But unlike what usually happens, time doesn’t seem to mend the gap between the two, choosing to widen it, instead. So much so that Paolo eventually grows convinced that his friend Bruno, who is a mountain shepherd, would have made a more fitting son for his father. Eventually, Pietro abandons his father, and by the time he wishes to make amends, it is too late. For there is no bridge that can be built to reconnect with the dead.

Having lost his father, along with any chance to truly understand him, Pietro begins to walk his father’s favorite trails. In walking these trails Pietro tries to gain a better understanding of his father. His attempts to do so does give him certain inklings as to the kind of man he was. It also gives him a chance to reconnect with Bruno.

And it is in his friendship with Bruno that the reader is allowed to see how similar Pietro was to his father. Because both experienced an avalanche as a defining moment in their lives, both are forced to forge a path of their own.

And while the path that Pietro eventually chooses doesn’t lead him back to the mountains, it does demonstrate the sturdy, caring and unyielding man that he comes. Meanwhile his relationship with Bruno grows ever more similar to his father’s relationship to his one-time best friend, the loss of whom served as a defining moment for him.

The eerie beauty of The Eight Mountains isn’t in the similarities between the experiences of father and son but the varying results that they can produce. This makes a great deal of sense, considering the fact that the novel takes its name from an old Nepalese legend, centered on the different varieties of human experience.

It would not be erroneous to say that at heart, both men are made of the same clay, but the shape that they give to themselves is vastly different. They share the same strength and courage of conviction yet choose to expend it on diverging paths. This is at once point of union and the gap that separates them. And it is in this self-discovery that both the coming of age story and the mythological odyssey lie.