Eichmann Before Jerusalem: The Unexamined Life of a Mass Murderer 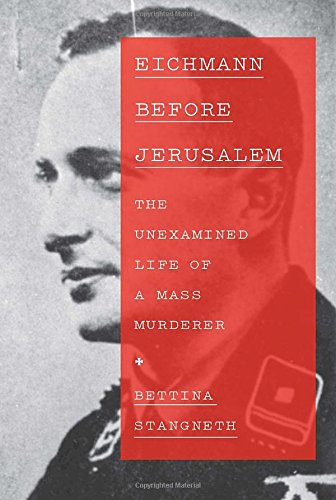 “Anyone with an interest in history, WWII, Nazis, Eichmann, the Holocaust, genocide, or the escape of many powerful Nazis to South America will find this book an amazing collection of old and new details.”

There have been many books about Eichmann’s trial and conviction in Israel for the murder of six million Jews. And there have been books about Eichmann while he was the architect Nazi genocide. But few authors have focused primarily upon Eichmann’s escape from an Allied POW camp, his quiet life in Northern Germany, and years later his life with his family in Argentina before he was captured by the Mossad.

To accomplish this, author Stangneth had to examine thousands of wide-ranging documents and anecdotal sources, many of which had not yet become available to researchers or the public. She extracts and examines evidence from new sources as well, including Eichmann’s own words about his culpability in the Nazi genocide. This is the essence of Eichmann Before Jerusalem, a profoundly well-researched and authoritative work of scholarship. It is also surprisingly engaging for a work of erudite purpose.

Eichmann Before Jerusalem is a powerful and exceptionally well-researched dissertation revealing the years in which Eichmann had escaped from Allied confinement and then joined with other like-minded Nazis in Argentina, where he and his colleagues were protected by the government from extradition.

One of the key themes of this book is Eichmann’s culpability in the industrial-scale extermination of millions of men, women, and children. Stangneth produces ample empirical evidence that Eichmann enjoyed his role as the eradicator of Jews. He was proud of it in the “Sassen Tapes,” where Eichmann expresses regret for not having had the time to exterminate all nine million European Jews.

This does not coincide with the “banality of evil” described by Hannah Arendt. Here we see that Eichmann is no mild-mannered clerk following orders. He relishes in improving efficiencies of scale in the industrial process of killing Jews. Eichmann’s responsibly was to make all of Europe Judenrein (without Jews). He might well have been following orders. But he also helped create orders and through this book we see that he enjoyed improving the process of murdering Jews rapidly.

Willem Sassen, an Austrian journalist living in Argentina recorded extensive meetings of Nazi leaders who successfully fled Europe and prosecution, including Eichmann, who had escaped from the Allies. This later became known as, “The Sassen Papers.” These “Nazis in absentia” desired to revive the creed of Nazi Germany and to build a better world based upon their reactionary political philosophy. Within the hundreds of hours of recorded voices and from handwritten notes by Eichmann himself, we view their goal: a world without Jews and a fascist state in which these former Nazis could thrive and prosper, as well as pass along Nazi “virtues” to their genetically similar progeny.

Stangneth shows with detailed references that we cannot be fooled into thinking of Eichmann as a simple clerk in the Nazi system, following orders from Himmler and Hitler to murder Jews. She delivers details from the Sassen papers and beyond that prove Eichmann was not only encouraged by his responsibility, but that he had a powerful desire to complete the job worldwide.

Stangneth’s meticulous research and evocative writing style make this book a masterpiece. Her references alone constitute more than 150 pages in this 620-page galley proof. Yet the book is completely readable by anyone with an interest in Nazi Germany or Eichmann; however, reading a very detailed and lengthy non-fiction book is at times an onerous effort, particularly for visual learners. The addition of maps, pictures, diagrams and other visual tools would enhance readability.

Stangneth’s meticulous research, driving purpose, and powerful writing enable us to observe the master of genocide as he escapes prosecution and enjoys recording conversations with like-minded Nazis in absentia. Yet in the end, Eichmann’s profound urge to be seen, admired, and valued as a hero gave him a false confidence in how he would be viewed in a trial and how little time he might have to serve in prison for his nefarious past.

Anyone with an interest in history, WWII, Nazis, Eichmann, the Holocaust, genocide, or the escape of many powerful Nazis to South America will find this book an amazing collection of old and new details. Stangneth has sourced through tens of thousands of documents and countless hours of recordings to produce this empirical book about Eichmann’s escape and his life in Argentina.