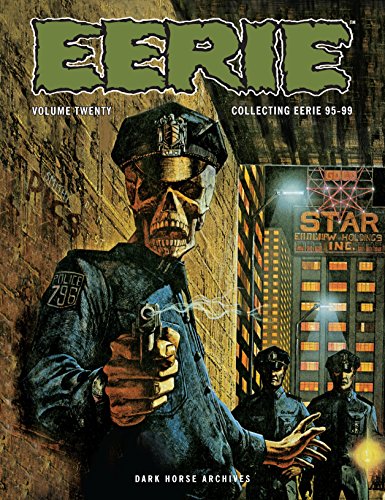 “a delightful sampler of the grotesque and absurd.”

Dark Horse gives the horror magazine Eerie a lavish treatment usually befitting the Old Masters. It is similar to Taschen's longstanding reputation for publishing both fine art and more lowbrow subject matter. Eerie thrived from 1966 to 1983 as a creature of Warren Publishing. Warren also published Creepy, Vampirella, and Warren Presents.

As a magazine, Eerie successfully skirted the puritanical diktats of the Comics Code Authority. Navigating through this loophole gave readers an opportunity to discover comics with more adult themes and visuals. Expect more nudity, adult language, and violence. Vampirella's outfit (or lack thereof) is quite memorable as she teams up with Rook to fight dinosaurs and prevent a far future doomsday machine from going off.

Whether or not this made Eerie a more intellectually mature publication is an open question. A better parallel may be with the low-budget B movies, although even those had a tendency to insert sharp social commentary in their material.

Everything from the issues has been reprinted, including letters to Uncle Eerie, ads for monster movies, and the glorious cover art. The ads shine a light on what was popular during the era. A 28” by 19” Prince Valiant could be purchased for $3.00 and a 1979 Frank Frazetta calendar cost $4.95.

The letters section offers a glimpse into the readership. The battle between “more horror!” and “less social commentary!” remain a constant. There are also calls for more American artists. One individual writes, “Nuts was terrific and I liked the color. I also liked Babs O'Tool and her farout outfit! I hope this is a series—it would be terrific.”

(This letter seems quintessentially Seventies.) He goes on to say, “Mac Tavish was also well written—a real combination of Star Wars and Buck Rogers.” But not everyone is sold on the new space opera directed by George Lucas. Another letter writer opines, “Actually, Mac Tavish is better than Star Wars because the movie was pure fantasy and obvious. Mac Tavish isn't.” While the Mac Tavish series is no Star Wars, there are times when it feels like Stephen Colbert's Alpha Squad 7: Lady Nocturne: A Tek Jansen Adventure.

Dark Horse's treatment has transformed the lowbrow genre of horror and space opera into fine art. The four volumes present a surprising range of material, from outlandish space opera to horror stories with insightful social commentary. With tales to scare and titillate, Eerie Archives Volume Twenty provides a delightful sampler of the grotesque and absurd.