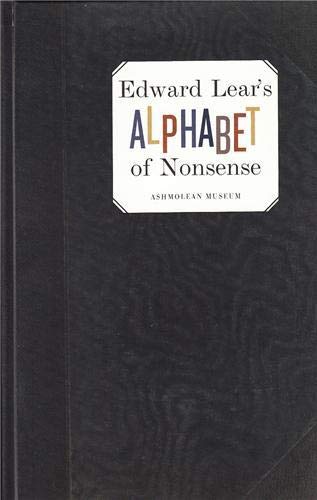 “While Edward Lear’s Alphabet of Nonsense might not look bright or tidy, it’s nice insidy—and as close as most of us can get to honoring a baby with an original book.”

Imagine a world where children never laid eyes on “The Owl and the Pussy-Cat” with their beautiful pea-green boat . . . or never ventured to the land where the silly Jumblies live and went to sea in a sieve.

Thanks in large part to Edward Lear, young and old encounter a literary landscape forever expanded and enriched by topsy turvy nonsense.

Born in 1812, Edward Lear began his career as an artist, but today we associate his name with playful, irreverent rhymes—especially his limericks—and for his whimsical illustrations. Much of the nonsense poetry that brought him fame began as offerings to the children of friends. The Ashmolean Museum’s handsome publication of Edward Lear’s Alphabet of Nonsense is a facsimile of a unique baby present.

One of six published nonsense alphabet books by Mr. Lear, this version was born at the estate of William and Arabella Prescott, who had a new granddaughter named Ruth Decie. In the enlightening introduction to the Ashmolean edition, curator Colin Harrison relates that “Lear recorded in his diary for 22 June 1862 that he ‘rose at 6:30 & made an alphabet for the Decie baby till 9,’ and completed it after lunch.”

Resembling a journal, with marbled end papers, a black cover and inside, soft blue pages and gray, this work has an unusually fresh, informal feel to it. Readers can even see the faint lines on which the artist drew each capital letter, as well as occasional spots, ink splotches, and smudges.

The format is pleasing, with an easily read typeset page on the left containing first the uppercase letter, followed by a four-line rhyme, then the lowercase letter with a snappy little phrase. On the facing page, we see the corresponding replica of Mr. Lear’s pen-and-ink drawings of animals and mostly everyday objects, with his handwritten poem and phrase beneath. Each letter shows a splash of spontaneity and the artist’s delight in the doing.

The alphabet book differs significantly from the 1871version included in many anthologies, with such well known bouncy lines as “A was once an apple pie,/ pidy/ widy/ tidy/ pidy/ nice insidy, apple pie!” Rather, the rhymes here seem more subdued, only now and then dipping into the absurd.

For instance, “J was a Jackdaw/ Who hopped up and down,/ In the principal street/ Of a neighboring town.” And then there’s the jiggly nonsensical phrase: “j! Jacky-jo-jown!”

More fun follows, as in: “M was a Mill,/ Which turned round and round/ As fast as could be/ With a loud hummy sound.” Underneath the rhyme we find: “merry old mill!” The facing page shows Mr. Lear’s endearingly imperfect drawing of a windmill and a ladder leading to the ground.

While Edward Lear’s Alphabet of Nonsense might not look bright or tidy, it’s nice insidy—and as close as most of us can get to honoring a baby with an original book.