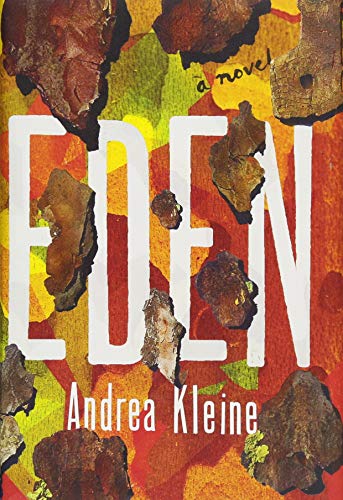 Twenty years ago, Hope, 14, and her sister Eden, 16, were kidnapped. They barely made it out alive and now their kidnapper, Larry, is up for parole. The sisters might be called upon to testify. The problem is that Eden is incommunicado. She’s been estranged from the family since right after the abduction. When their mother dies of lung cancer, Hope drives her mother’s dilapidated camper across the country in search of her sister.

Eden and Hope are overtly symbolic names for one sister who longs to return to a time before the childhood trauma and one who never wants to go back.

As a novel about post-traumatic stress, Eden is both fascinating and maddening. Hope often seems to be disassociating even as she reports on the facts of the kidnapping:

Her restricted range of emotions is problematic, but it may have been the author’s intention. Eden is not a novel about PTSD, it’s a chronicle of firsthand experience. Hope’s robotic point of view might evoke a range of emotions in readers who long for a connection with the hero, but Hope is suffering. As a narrator, she’s not capable of delving deeply into her own psyche or anyone else’s. In many ways, she’s still 14.

Years into Hope’s relationship with her girlfriend, Noreen, she finally tells her about the kidnapping, and this is how she describes Noreen’s reaction:

“Noreen fluctuated between shock, being upset with me for never telling her, and putting on her professional social worker hat and trying to control her reaction.”

This succinct distillation of her girlfriend’s reaction is reminiscent of the many times throughout the book when Hope tries to convey what others are feeling without feeling much herself. Hope has been showered with one misfortune after the next. Her parents are going through a terrible divorce, they’re negligent, and on top of that, even before Eden leaves, she’s not a model sister. All of this piling on of bad luck only serves to highlight the fact that Hope is doing little more than offering readers a dispassionate appraisal of the carnage.

Later after Hope has told Noreen about the kidnapping, she says: “I put my arms around her and stroked her back. I tried to calm her. I so wanted her to stop crying that I sort of brushed it all off like the kidnapping wasn’t that serious a thing.”

Who brushes off a kidnapping? And it doesn’t even occur to Hope that Noreen is upset about a kidnapping that Hope should be upset about. Noreen is crying and carrying on instead of the survivor and yet Hope can’t see it.

Hope’s sister, Eden, suffers from an amalgam of PTSD symptoms that begs explanation. She’s removed herself from her entire family and moved across the country without a word. No one knows whether she blames them or she just can’t face them and, in all likelihood, they never will.

How then will Hope survive this mess? She’ll survive because she’s not quite there. She’ll survive by operating on autopilot, recalling the facts without taking them in. As her friend Nico says: “I love what you’re doing, but the audience won’t. You’re too internal.”

The grown-up part of Hope’s life as a lovelorn, struggling playwright living in New York City is riveting. A novel about how Hope navigated that world would have been enough to seduce any reader, but the fact that the chapters alternate back and forth from childhood trauma to angst-driven New York living was hard to navigate especially when chapters in New York detailing performance art followed closely on the heels of chapters about childhood abuse. Hard not to skip right over New York mishmash to find out how the protagonist will outsmart the kidnapper.