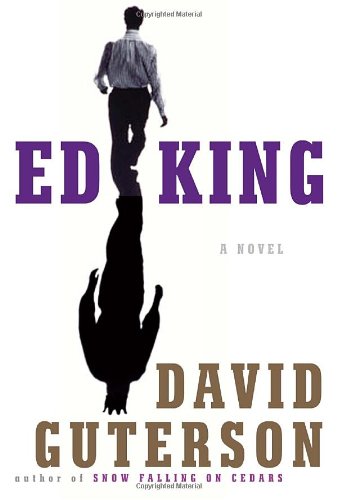 “. . . the big problem is the second requirement for retelling a myth: Why bother? Of course it can just be a fun ‘what-if.’ Yet it would be a stronger piece of literature if there were something more—perhaps a moral point or a significant contrast between then and now. And Ed King doesn’t seem to have anything to offer. Which leaves it as merely a pretty good novel with a gimmick.”

Let’s settle the obvious part right off: Yes, Ed King is a modern day retelling of the story of Oedipus. Infant boy is given away and eventually adopted; check. His feet are tied together; check. He’s raised as a prince—in this case, a suburban Jewish American prince; check. He kills a man he doesn’t know is his birth father in an act of road rage; check. The contemporary hero’s name is even an anglicized version of the Greek: Ed (Oed-ipus) King (Rex).

The novel doesn’t precisely follow every plot turn of the original, but on the other hand, author David Guterson provides extra guessing game fun by scattering references to all sorts of things classical Greek. For instance, Ed’s adoptive mother refers to the foot problems related to the tying as “his little Achilles heel.” A few years later, Ed’s kindergarten teacher writes that he sees comic book superheroes as “something like the panoply of Greek or Norse gods.”

So now let’s hurry up and get to the part where Ed sleeps with Mom.

Give author Guterson credit for trying to put flesh, bones, and believable motivations on the myth. In a world where it’s usually older males who take sexy younger trophy wives, why would a virile, good-looking, smart, twentysomething guy be attracted to a woman who is—literally—old enough to be his mother? Well, first she has to be very young when she gets pregnant—say, 15. Then she must marry an heir to a ski manufacturing fortune so that she has the money for a series of facials, facelifts, and other plastic surgery to keep looking youthful. Plus, the younger man must have already set a pattern of dating older women.

Still, the winks and nods are not enough. Mr. Guterson is a serious, bestselling writer—author of the acclaimed Snow Falling on Cedars—and if he wants this book to be taken seriously as well, it should accomplish two things: It needs to stand on its own, as a novel. And it must justify the rewriting of a classic story.

As a novel, Ed King succeeds pretty well. It has original characters, a race to discover the truth as gripping as the denouement of Daphne Du Maurier’s Rebecca, and some insights into human relationships so sharp that they make a reader cringe with painful recognition.

The modern story begins in summer 1962 when a mild mannered Seattle actuary named Walter Cousins has a brief affair with his 15-year-old British au pair, Diane Burroughs, while his wife, Lydia, is in a mental health facility for a month. Diane gets pregnant, Walter arranges for adoption, but instead Diane sneaks off with the newborn boy and proceeds to blackmail Walter for child support. Actually, her childraising lasts less than 48 hours.

Diane ultimately leaves the baby on what looks like a nice family’s doorstep but proceeds with the child support blackmail. The baby is eventually adopted by a liberal, secular, Jewish physician and urban official, Dan King and his wife, Alice. Fourteen months later, they give birth to a second son, Simon. After a range of teen angst, Ed and Simon each become tech entrepreneurs. Ed, in particular, is wildly successful. And one day, at an antiquated World’s Fair exhibit, he meets an attractive, flirtatious older woman . . .

Mr. Guterson is spot-on in delineating the total inability of both sets of parents to communicate with their sullen, smug, rebellious teenage offspring. Each teen insults and hurts his or her parents in a different but too-common seventies way, and each parent, in turn, flounders in his or her own incompetent way.

Ed becomes a beer-chugging, drug-taking hot-rodder and (as Walter describes him just before the roadside altercation) “a raging powerful young warrior.” Simon is a video-game geek. Walter and Lydia’s son, Barry, is a drummer in a Goth band, and his sister, Tina, is a hippie poet. Alice writes Ed’s bar mitzvah sermon, Lydia makes excuses, and Walter alternates between anger and caving.

Ed King offers a different, more intense insight as it delves into Ed’s guilt and desperation when he realizes he has killed Walter (still not knowing this was his birth father). He secretly watches the funeral. He stalks Tina. He can’t eat or get out of bed.

However, Ed recovers too easily from this despair. An antidepressant, and Boom! He’s not only out of bed, but he’s also dropped his slacker ways and is now a star of the high school math team. Similarly and even worse, Ed seems way too blasé at the most crucial point [POSSIBLE SPOLIER ALERT!] when he discovers his true parentage.

A smaller flaw is that Mr. Guterson takes the easy way out by making clichés out of Alice and Dan’s too-Jewish parents. Alice’s father, for example, kvetches that “She marries a guy who is admittedly a nice guy, only problem is he carts her somewhere else, then she forgets back home in San Jose, now I see her maybe twice a year, three times if she has tsuris.”

But the big problem is the second requirement for retelling a myth: Why bother? Of course it can just be a fun “what-if.” Yet it would be a stronger piece of literature if there were something more—perhaps a moral point or a significant contrast between then and now. And Ed King doesn’t seem to have anything to offer. Which leaves it as merely a pretty good novel with a gimmick.