Ecstasy and Terror: From the Greeks to Game of Thrones 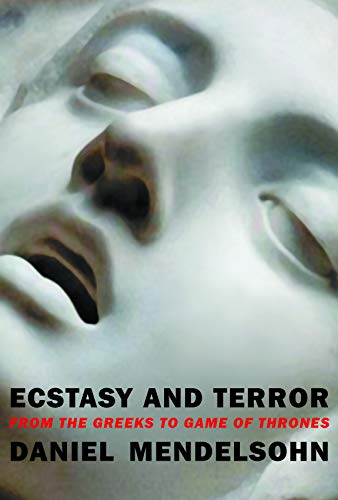 “Daniel Mendelsohn fulfills his own criteria for good criticism. His erudition is always impressive, but one never feels that he is showing off. Above all, his essays glow with his love of his subject matter.”

Ecstasy and Terror: From the Greeks to Game of Thrones is a collection of essays Daniel Mendelsohn wrote for The New Yorker and the New York Review of Books. The collection is divided into three sections: “Ancients,” “Moderns,” and “Personals.” The final essay in the volume is “The Critic’s Manifesto.” There Mendelsohn proclaims that meaningful critical judgment comes from a combination of a deep knowledge of and passion for one’s subject and taste. We see all these criteria at work in the essays in this volume

Mendelsohn received a doctorate in ancient Greek literature but decided against academia in favor of being a public intellectual. The essays devoted to classical literature offer superb analyses of drama (The Bacchae), epic literature (The Aeneid), and the architecture of the Parthenon.

The longest essays are on Sappho and Alexander Cavafy. In both essays, Mendelsohn shows great knowledge of the backgrounds of the authors and the texts they created. His knowledge of Greek means that he can be critical of translations. Mendelsohn is an educator, wishing to convey to a curious reader why the works he discusses matter in the 21st century.

In the second section, “Moderns,” Mendelsohn discusses a variety of works from Evelyn Waugh’s Brideshead Revisited to Game of Thrones. The strongest of these essays demonstrate Mendelsohn’s gift for combining disparate elements from high and popular culture.

A review of Karle Ove Knausgard’s 3,600 page novel, My Struggle juxtaposes a discussion of the work with the television melodrama Suits. Why is it, Mendelsohn asks, that a hugely ambitious literary work can leave him cold and Suits can elicit powerful emotions? What does that say about the pleasures of traditional popular narrative? A review of the films Her and Ex Machina begins with a survey of works about robots from Homer’s Odyssey and Iliad to 2001: A Space Odyssey. Mendelsohn sees Game of Thrones, which seems geared to appeal to a male audience, through a feminist lens as a work about powerful women.

Finally, in Personals, Mendelsohn offers essays that merge criticism with autobiography. The longest, “The American Boy: An Author, A Young Reader, and a Life-Changing Correspondence, chronicles his correspondence with author Mary Renault. When he was 14, Mendelsohn so fell in love with Mary Renault’s classic homoerotic novels set in ancient Greece that he wrote the author, then residing in South Africa, a fan letter. Much to the boy’s surprise, Renault answered the letter, beginning a correspondence that lasted for years. The essay merges memoir with a rich analysis of Renault’s works.

Throughout the volume, Daniel Mendelsohn fulfills his own criteria for good criticism. His erudition is always impressive, but one never feels that he is showing off. Above all, his essays glow with his love of his subject matter. When he doesn’t like a work, he shows that he has read it carefully and crafted a solid argument for his disapproval. The writing is clear, elegant and free of what the author calls the rebarbative jargon of much academic criticism. Ecstasy and Terror is always a pleasure to read.