An Economist Gets Lunch: New Rules for Everyday Foodies 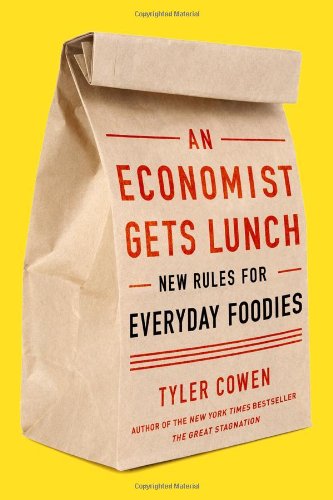 “exhausting . . . The next time an economist invites you to lunch to talk about food . . . Consult your calendar and then reply, ‘How ’bout never? Is never good for you?”

Last year, Tyler Cowen created quite a stir with his controversial ebook, The Great Stagnation, a slim book with a big impact that argues that our economic crisis is linked to a decline in innovation. This year, Mr. Cowen is taking on food—with some equally provocative ideas.

In An Economist Gets Lunch, Mr. Cowen breezily moves from micro to macro economic theory and back when tackling all manner of food related subjects from buying groceries, how to choose the best restaurants, how to feed a growing global population, the green revolution, food advice for travelers, and more.

The problem is he has you zigging and zagging from the personal, to the local, to the global, to the corporate, to the political, and back again to the personal so often that it will make your head spin.

Individually, each chapter could stand alone as long-form journalism. Taken together, it is like attending a potluck supper where you pile your plate full of different dishes that don’t marry well. Sure, you’ll be full at the end of the dinner, but was it an enjoyable experience to eat lasagna alongside lentil salad and curried cous cous with shrimp?

Mr. Cowen‘s aim is to look at food through the lens of economics using the guiding principle that “[f]ood is a product of economic supply and demand, so try to figure out where the supplies are fresh, the suppliers are creative, and the demanders are informed.”

The author’s hope is that by “becoming a better consumer of food [we] can revolutionize the world.” It sounds a lot like Michael Pollan, but without any clever catchphrase to sum up his worldview like Pollan’s “Eat food. Not too much. Mostly plants.”

Still, there is plenty in An Economist Gets Lunch that will no doubt get people talking, (which, as he proved in The Great Stagnation, is Mr. Cowen’s stock in trade).

Take his defense of agribusiness, for example: It isn’t entirely their fault that American food is often bad. In part, he argues, it is “some pretty stupid laws” passed by politicians. Agreed, but who lobbied the politicians to pass these laws?

Later in the book, Mr. Cowen goes on to write “there are plenty of contemporary critques of commercialized agriculture, big business, and new technologies such as genetically modified organisms. In all these heated debates, the balanced perspective is too often lost. The broader history shows that technological progress and agricultural commercialization have brought major and lasting improvements to the lives of billions.” He further argues that ‘the agricultural platform . . . is one to build upon and improve rather than throw away.”

True, we aren’t going to feed the world one small farm at a time, but we need to remain vigilant about oversight of the platform. On the question of oversight Mr. Cowen says very little.

Meanwhile Nicholas Kristof writing in his op ed column in the Times broke the news that the feed used in large-scale poultry farms routinely contains ingredients like caffeine, Tylenol, Benadryl, antibiotics, and arsenic. Is this not reason enough to remain skeptical of agribusiness?

It is on the question of food production and obesity that Mr. Cowen is at his most provocative. “We’re not going to solve obesity problems by going back to the food world of 1890. It may sound simplistic, but we need more self-control.” Um, yes, it does sound simplistic.

Which brings us to his disdain for the locavore movement . According to Mr. Cowen, the economic efficiency and carbon footprint left by small farmers driving X number of miles to bring their food to market outweighs the feel-good effect from buying locally.

Maybe, but he misses the point that buying locally provides the consumer with better quality and fresher food. Plus it’s just so darn fun chatting with the farmers that for many, the added cost in terms of efficiency and carbon output does not outweigh the benefits.

Mixed in with all of these weightier food topics, Mr. Cowen pauses from time to time to give you his take on more personal subjects like the best foods to order when traveling around the world to places like Tokyo, Singapore, India, France, Sicily, London, and others (all while keeping his economist’s hat on).

He’s also got a chapter to educate you on the best barbecue in America and how it’s made (which I am pleased to report is local and artisanal—which for some reason doesn’t rankle him.)

Then there’s one on why Mexican food tastes better in Mexico (in case you couldn’t figure that one out on your own) as well as a chapter on grocery shopping (he thinks the best and cheapest way to shop is to go to a Chinese market—the smells notwithstanding), one on eating out (he generally prefers out of the way and inexpensive, but makes an exception for Japanese which to him is worthy of dropping over $100 per person). Finally, he concludes with a chapter on cooking at home, including advice on catering a large party (hire a food truck).

Having been served an exhausting amount of economic food for thought in An Economist Gets Lunch, here’s one final piece of advice: The next time an economist invites you to lunch to talk about food, do what is depicted in a New Yorker cartoon from a number of years ago.

Consult your calendar and then reply, “How ’bout never? Is never good for you”?