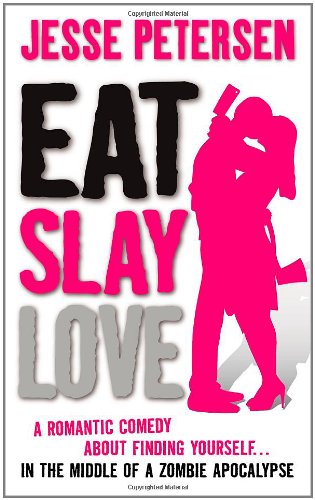 “Eat Slay Love is written in a snarky, flippant, and relaxed style that makes reading it quick and easy. Ms. Petersen is deft at squeezing out all the comic zaniness that is inherent in a zombie apocalypse.”

Your husband was bitten by a zombie, but saved at the last minute by a cure created by a mad scientist. While bringing the cure to civilization, your husband starts exhibiting super abilities. What do you do?

If you’re Sarah, you stand by your man—no matter what—even if that means lying to a reporter, saving his ass from crazy cultists, and possibly even infiltrating a heavily guarded military stronghold.

Eat Slay Love is the third book in Jesse Petersen’s Living with the Dead series about a married couple surviving the zombie apocalypse. Although you might have a stronger vested interest in Sarah and her husband David if you’ve read the first two books, Eat Slay Love was written in such a way that it can satisfactorily stand on its own.

When the zombie apocalypse hit, Sarah and David’s marriage was on the rocks. Both were unhappy in their lives, and it was taking a toll on their relationship. But fighting zombies side-by-side has brought Sarah and David closer together . . . so much so that when David’s reaction to a zombie-bite cure has him showing super strength, not sleeping, breathing strangely, and even more spooky things, Sarah still wants to protect him—whatever the cost.

As they make their way to the Midwest Wall—the wall that separates the zombie-infested badlands from civilization—they end up rescuing Nicole Nessing, a former entertainment reporter with her eye on getting a Pulitzer, and Colin McCray, the still-somewhat-drug-addicted lead singer for the now dead (in more ways than one) British rock band Lead Tongue. This motley crew faces zombie attacks, crazy cult refugees, and eventually the government, which is bent on covering up the zombie infection fiasco.

David is smitten by Nicole’s feminine charms, so he doesn’t see how she’s trying to trick him into revealing his secret. Sarah is at her wits end trying to keep him from revealing too much and endangering their mission. Meanwhile, McCray is bumbling about looking for his next fix, making everyone wonder how he survived the past few months on his own.

Eat Slay Love is written in a snarky, flippant, and relaxed style that makes reading it quick and easy. Ms. Petersen is deft at squeezing out all the comic zaniness that is inherent in a zombie apocalypse. Since Sarah is the narrator of the story, you get a close-up into her personality. From comments on post-apocalyptic fashion to lovingly annoyed remarks about David, Sarah reveals not only learns about her girly side, but also her strong love for and attachment to her husband. Sarah is a thoroughly three-dimensional and likeable character, which is somewhat remarkable for such a light and breezy romantic comedy.

Equally enjoyable is how the character of Nicole Nessing is revealed, layer-by-layer, as the book progresses. Ms. Petersen is very good at developing her female characters. On the other hand, the male characters do seem to be there mainly for comic effect or to act as a foil to the female characters.

Jesse Petersen’s Eat Slay Love has everything a girl could want in a quintessential sitting-by-the-pool summer read. A mix of romantic love, comedy-laced horror, and mystery thriller, all written in an accessible, easy-to-read style this book will have you flipping through the pages as quickly as you would hightail it away from brain-starved zombies.