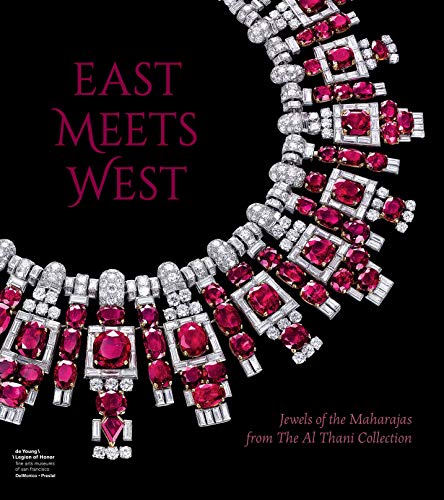 “This is a treasure of a book from both the visual standpoint and the informational since the images are skillfully and comprehensibly described and given context.”

It would be exceedingly difficult not to describe this monograph as exquisite. Chapman’s premise is that the East, meaning India and its environs, has influenced the West and its environs, meaning the USA and Europe and vice versa. This is in fact both the mission and purpose of this tome, but East Meets West is so much more than just a visual comparison and explanation.

“This exhibition explores the cultural and material exchanges between India and Europe through jewelry and precious objects ranging from the seventeenth century to the present. It features more than 150 pieces made in India or Europe associated with Mughal emperors, maharajas, and their courts.” —Legion of Honor Museum catalog

Chapman proffers a chronology of design influences as well as providing amazingly interesting facts about the process of creating jewels such as these. Haute joallier is often associated with the great French heritage brands that in fact produced many of the astounding pieces for Indian royalty (Cartier in particular), but it was India that was innovating methods of creation as well as being the source of some of the most unimaginably perfect and memorably sized stones, not to mention their assortment of pieces that are adorned with precious stones.

We may have had Marie Antoinette, Barbara Hutton, and Marjorie Merriweather as poster girls for owning and wearing wildly extravagant jewels, but it was the Indians who showed them all that they really knew the meaning of more is better; they piled it on. It is interesting and key to understand that in the East these immense pieces were worn by men of royal lineage and not by women, in some ways very much like tsarist Russia, but there the women also indulged their love of such ornamentation. Jewels were a signifier of wealth as well as social position and in pre-feminist times that meant the men got to be the “billboards” for their social standing.

One of the most striking and surprising elements of the book is the comparison or influence that India has played in the design of the wildly creative jewels designed and made by JAR (Joel Rosenthal) of Paris. These pieces are truly beyond description.

Another great asset and surprise of East Meets West is the glossary that is included at the close of the book since most monographs of this genre seem to assume that all readers will be cognizant of the vernacular of the art and craft of gemstones and jewelry deign.

This is a treasure of a book from both the visual standpoint and the informational since the images are skillfully and comprehensibly described and given context. If you consider yourself a jewelry aficionado or budding authority then this is an absolute must to add to your library.