The Earth Is Weeping: The Epic Story of the Indian Wars for the American West 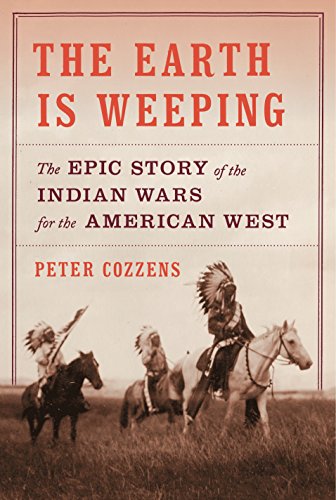 “a timely and thorough story without hyperbole or histrionics of this controversial chapter in American history. . .”

Many Americans consider the ongoing conflict in Afghanistan as America’s longest war. In this new book, Peter Cozzens tells the story of an even longer conflict, the nearly 30-year battle between the U.S. Army and the indigenous tribes of the Great Plains and American west from roughly 1862–1891.

An American military officer with recent combat experience in Iraq or Afghanistan will find some uncanny similarities with his forbearer serving on the Plains. The American military was called to protect vital wagon trails and railroads, protect settlers, and attempt to pacify the various tribes living in the West, settling and confining them to reservations.

Unfortunately, the American army after the Civil War almost disintegrated, going from a wartime height of nearly 1,000,000 men to less than 25,000 in 1874. That number included all Army troops, particularly troops occupying the Reconstructed South and other Army outposts, leaving a very small number of soldiers to pacify nearly half of the United States.

In addition, the quality of soldiers and their training was abysmal, many troops firing their weapons for the first time in actual combat. The leadership of the army also varied widely, from competent combat seasoned veterans, to incompetent officers who spent the Civil War in staff positions with almost no combat experience.

In contrast, the Plains tribes were the Spartans of the American west, trained from their youth in the skills of raids, ambushes, and mobile warfare. Man for man, the Indians were clearly the better fighters. But the Indians fought as a loose collection of individual warriors, and the U.S. Army fought as a disciplined organization, which determined the outcome of more than one campaign as loose confederations of warriors from different tribes may have been able to defeat the U.S. Army on a tactical level, but their internecine conflicts prevented them from uniting to achieve a common strategic goal.

This was never more true than during the Civil War itself, when most of the regular Army disappeared from the West, and for a brief window, a united alliance of Indian tribes might have made a real difference in slowing the tide of settlers that continued into the Plains states during and the war.

Unfortunately, the various tribes took the opportunity to settle old scores and attempt to seize better hunting grounds from neighboring tribes and the window rapidly closed as volunteer regiments were raised to replace the regular units that had gone east to fight in the war.

In addition, for most of the wars, the U.S. Army nearly always had Indian allies from opposing tribes to serve as scouts, providing vital support without which the Army would have never been able to win the campaigns they did.

Like nearly all wars, this conflict was not settled by dramatic battles like the Little Big Horn or Fetterman’s Massacre, but by logistics and grinding attrition. The Indians simply did not have the manpower or firepower to stop the tide of settlers or truly defeat the U.S. Army.

The role of settlers and railroads is also crucial in the final defeat of the Plains Indians. The settlers took over many of the prime hunting grounds and nearly exterminated the huge herds of buffaloes the Indians counted on for their survival. Combined with the ability of railroads to bring even more settlers and provide vital communications links for the growing numbers of farmers and ranchers that were closing the frontier and the Indians inevitably lost not only the war, but their nomadic way of life.

Cozzens does an exceptional job of examining the viewpoints of both sides, making heavy use of previously untapped primary sources, noting in particular that Army officers charged with fighting the Indians often sympathized with them, aware that the tribes were fighting merely to protect their land, women, and children from an overwhelming tide of settlers that had no real intention of leaving the tribes their traditional hunting grounds.

This is a timely and thorough book, presenting the story without hyperbole or histrionics of this controversial chapter in American history, providing an excellent one-volume history of America’s actual longest and most tragic war.