On Earth and in Hell: Early Poems (English and German Edition) 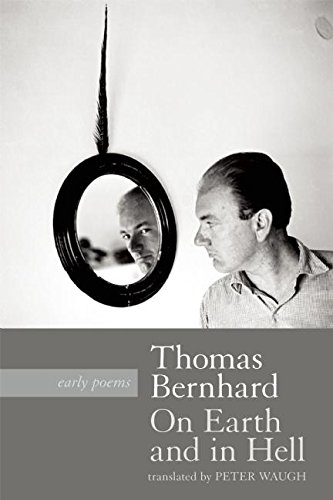 “a fascinating peek into the genesis of Austria's controversial literary figure.”

Thomas Bernhard published his first work in 1957, a poetry collection called On Earth and in Hell. Like other German-language writers, he sought to enter the literary scene with poetry and then move on to writing novels. Peter Waugh ably translates Bernhard's poetry, providing a window in which to view this early literary stab at greatness.

Unlike his later work, the poetry possess a lyricism and beauty often missing from Bernhard's novels. His postwar fiction presents a scathing indictment of his native Austria, Catholicism, and middle-class life. Reading a novel like The Lime Works (from 1970) is like opening a blast furnace. The energy and ferocity become an endurance race, with a few short paragraphs setting up the action soon devolving into a book-length single-paragraph tirade. But this anger and bleakness do not appear in these early poems.

What his poetry possesses is a lyrical melancholy and a yearning for pastoral idylls. It embroiders two strands at odds with each other. One strand is a ferocious indictment for Austria's nationalist fervor leading up to the catastrophe of the Second World War. The second strand desires living things, whether they are happy farmers, growing flowers, or beautiful fields of grain.

Waugh touches on a point about Bernhard's political affiliations. While his later fiction and drama might operate as leftist agitprop, Bernhard actually belonged to the conservative Austrian Farmers' Association. This might seem contradictory or bizarre, but the poems unravel this puzzling ideological affiliation. In “November Sacrifice,” he opens the poem by saying, “I am unworthy of these fields and furrows.” A later poem, “What Will I Do . . .”, begins, “What will I do / when no barn begs for my presence,/when no hay burns in wet villages/without crowning my life?” The young poet seeks a place in the world, but the world isn't welcoming.

The idyllic atmosphere of a young poet communing in bucolic glades had been seriously disrupted on multiple levels. The first is Austria's collusion in the Second World War.

The second is Bernhard's fragile health, permanently destroyed when he caught tuberculosis in a Nazi-run hospital. Like Marcel Proust, his every breath becomes compromised by a body he must fight to control. Individual biology has turned into an eternal enemy and time moves forward. The poet's desire to leave a mark on modern society has turned into a more urgent and more important calling.

The desperation to create a memorable volume of poetry informs Bernhard's rage and melancholy in other poems. “What Drives the Souls through the Lilac Bushes” ends in a cryptic apocalyptic stanza:

What is it that drives the souls through the lilac bushes,

the cry which escaped from sleep, the syllables of darkness,

the sickness and thirst of secret killers

who strangle the dream between the apple trees,

and the distant shadows of the city

which death casts with the shadows of spring,

and which loves their frenzy with a thousand ghostly suns,

with millions of mouths and eyes going up in the fire,

in the gripping play of nothingness, when the ulcer of day

covers the thoughts of pears and rivers, of children / and the gloomy aged?

The passage works as an allusion to the Second World War, the Holocaust, and the lives lost in defeat and atrocity. “The sickness and thirst of secret killers” paints a succinct portrait of SS and Gestapo cruelty. The use of “apple trees” connotes both the imagery of nature and of the apple from Eden, where human sin introduced death to paradise. Although that is but one individual interpretation.

The abstract and symbolic meanings teased from the line could go in many different directions. The tortured lyricism foreshadows the work of German-language poets like Paul Celan, but also bears the stamp of Georg Trakl, a major influence on the young Bernhard.

Peter Waugh offers a haunting and beautiful renderings of Thomas Bernhard's poetry. Translation is no mere transcription from one language to another. Certain elements cannot be brought over from German to English. Lines from “At the Well” are rendered “Who will / love the birds that I despise / because they migrate south?”

But it fails the capture the alliterative quality of the original: “Wer wird / die Vögel lieben, die ich verachte,/weil sie nach Süden ziehn?” (Ws are pronounced as vs and v is pronounced as f.) But the art of translation is not about exactitude so much as an educated subjectivity. It is as much about choosing the right word, yet making that word mesh within the specific context of the piece. Peter Waugh's translation of Thomas Bernhard's early poetry offers a fascinating peek into the genesis of Austria's controversial literary figure.