Eagle Down: The Last Special Forces Fighting the Forever War 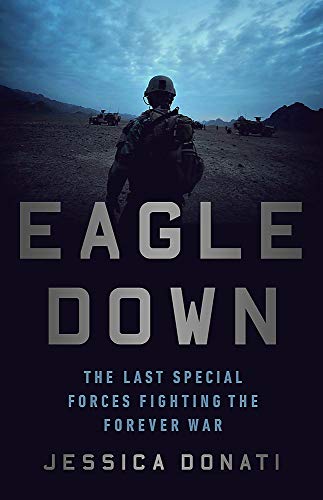 As America’s involvement in Afghanistan enters its 20th year, most Americans have forgotten that U.S. troops are still serving, fighting, and in some cases dying in that country. As a new Administration takes over, questions still linger over what America has accomplished for all the expenditure of blood and treasure and what role the U.S. will play in the future of that country.

This highly enlightening and at times disturbing book covers the last five years in that turbulent war, seamlessly blending a tight narrative of the strategic and political events of that time with an engrossing group of personal recollections of combat from Special Forces troops called upon to accomplish a nearly impossible task.

The author begins in early 2015, when a new unit of Special Forces teams are beginning to deploy to Afghanistan for an uncertain mission. Although the Obama Administration announced the end of U.S. combat operations at the end of 2014, these teams rapidly find themselves in the thick of heavy combat as they are sent to the most dangerous parts of the country to try and stem the potential collapse of the Afghan government under an assertive and coordinated series of Taliban offensives.

As the author notes in her incisive and brutally frank account, these Americans quickly find themselves literally between a rock and a hard place, thrown into combat with uncertain Afghan allies, limited close air support, tenuous supply, and most importantly, a highly political chain of command determined to obscure their role from an American public becoming increasingly skeptical of the entire war effort. Moreover, the Green Berets also face a major threat from “insider attacks” by their supposed Afghan allies, who become increasingly hostile to the Americans as they feel abandoned by their allies and neglected by their own government.

The author focuses primarily on two military operations, the fall of Kunduz, a major Afghan provincial capital in late 2015 and the continuing struggle for Helmand Province, long a center of heavy fighting between the NATO forces in Afghanistan and the Taliban. The operational account of these firefights will truly leave the reader astonished at the odds the U.S. troops overcame, not only from their Taliban opponents, but a chain of command that seemed often times to be out of touch with the reality of the situation on the ground and more concerned with following highly restrictive rules of engagement at the potential cost of U.S. or Afghan casualties.

The Kunduz operation ends with a mistaken air attack on a Doctors without Borders hospital by a U.S. gunship that leaves dozens of civilians dead and the U.S. military scrambling to contain the incident from political fallout over the role of U.S. troops in combat to retake the city. The Green Beret major in command on the ground is removed from command and nearly charged with war crimes before the full chain of events is eventually uncovered to almost no party’s satisfaction.

The second battle that spread across Helmand Province is more indicative of the long-term stalemate that has existed throughout the war. Even though this was the region where the Obama Afghan surge of 2010­­­­­­­–2011 concentrated most of the American war effort, the Afghan government’s corruption, incompetence, and indifference led to a strong resurgence in Taliban control over what they considered their heartland, and even strong American involvement only delays the inevitable loss of control of most of the countryside.

When the Trump Administration assumes responsibility for the war effort, a two-phased approach quickly takes shape. While the Administration publicly pushes for an Afghan peace deal leading to a complete withdrawal of American troops, the involvement of U.S. Special Forces and air power ramps up while still maintaining the mantra of merely training and advising Afghan forces. American policy during this period was also complicated by the rise of ISIS in the region and the fear of Afghanistan once again becoming a haven for terrorists. As the main part of the narrative end, the peace deal is tenuous, U.S. troops are still in country, and the Afghan government continues to lose control of the countryside.

Beyond the author’s recounting of information not previously known about America’s covert combat operations of the last five years, she also shows the very human face of war, following a soldier who becomes a double amputee and must not only learn to walk again and conduct the most basic of daily activities, but cope with PTSD and survivor’s guilt over for his teammates killed in action. The army major who approved the air strike on the hospital in Kunduz must also deal with the guilt and doubt about his decisions that evening, even as he struggles with deciding whether to stay in the army while serving yet another tour in Afghanistan. Much like the war itself, the book ends without a really decisive conclusion, just another tour of duty for America’s special operators.

America’s longest war is finally receiving its due from some fine books recounting the deeds of the brave troops who served under difficult conditions. This volume uncovers and narrates some uncomfortable facts not previously known to the American public in a straightforward manner, and is well worth reading to gain a better understanding of the complexities of modern combat in a land where it’s difficult to tell friend from foe and where the military objectives become subsumed into a polyglot of tribes, ethnic groups, corrupt allies, and political leaders with murky strategic objectives.