The Eagle and the Viper: A Novel of Historical Suspense 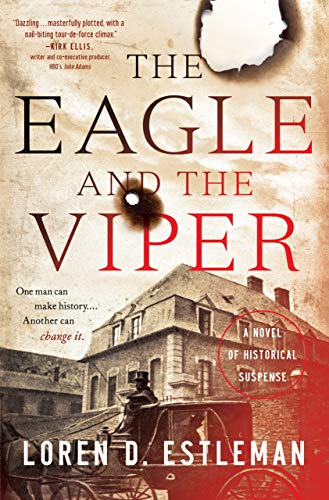 Creative nonfiction, that is, nonfiction with lots of fiction blown into it, has a double benefit for the reader: learning more about a real event, but enjoying the characters and dialogue made up and long gone.

Loren D. Estleman has taken advantage of entertaining the reader with just this mixture. The factual event: an attempt on the life of Napoleon Bonaparte on Christmas Eve, 1800; the fiction: the activities that surrounded the search for the perpetrators and a new effort to complete that failed attempt.

Estleman takes many of the real persons that revolved around Napleon’s life and gives them dimension and depth. Joseph Fouché, Minister of Police, is an ambitious politician who has spies everywhere and works to control who has access to the First Consul (Napoleon). Nicolas Dubois, Prefect of Police, reports to Fouché, and he has a warm relationship with Napoleon, much to Fouché’s displeasure.

Then there are the antagonists: Georges Cardoudal, a French Royalist who desires to see the royal family restored to France. He engages the assistance of the English who fear losing their form of government much as the French had. And then there is The Viper, a mysterious individual—a hired killer—who is paid a great deal to end Napoleon. Through The Viper, Estleman creates an almost superhuman character who has little respect for life, as he does away with any person with the flick of a wrist, while at the same time designing a detailed plan to accomplish his goal. The man is described as a “Roughneck[s] had been known to commit unsavory acts for profit, but this—professional assassin—was something infamous.”

Estleman also employs a cadre of minor characters, almost too many to name, who each play their own part in the plot. Napoleon and Josephine, while integral to the story, do not have major roles throughout, but there would be no story without them.

It should be noted that Estleman is adept at describing each of his characters in detail, regardless of that character’s role in the story. The reader comes away with a definite picture of the man or woman whose part in the story is crucial.

The story starts with the failed attempt on Napoleon’s life on December 25, 1800. Although Napoleon escaped injury, 22 citizens died and another 56 were injured. This event prompts Fouché and Dubois to begin their search—is this the plan of the Jacobins, as Napoleon believes, or the Royalists, as Fouché believes . . . “We could exile or execute every Jacobin in the Republic—in Europe, for that matter—and not touch the true villains. This is a Royalist Plot. I feel it in my bones.”

Although it does not take long for them to find the rogues, the results are more than they anticipated. Another plot is brewing—another assassin making plans—and they must use all of the tools available to them to learn who the person is and when this event will occur. And one of those tools is Martin Gaudin, French Minister of Finance, who discovers “financial adventures across the Channel.” It is this discovery that leads Fouché and Dubois to follow the money in search of further intrigues.

The first quarter of the book is detailed regarding the attempt, the search, and the discovery of something else afoot. While this is interesting, it is sometimes difficult to separate the various characters and the roles they play. Add to this the fact that at the time, months were renamed and must be explained to the reader, and Estleman uses parenthetical asides to provide the reader with some background information that may or may not be necessary but is distracting.

The slower pace in the first quarter notwithstanding, as Estleman edges the reader into the second quarter of the book, the action starts to ramp up with the introduction of The Viper. Here the story follows The Viper as he unfolds his plans to eliminate Napoleon—his reasons both monetary gain and revenge.

Estleman increases the tension when he designs an impromptu meeting between The Eagle, Napoleon, and The Viper (thus the title of the book), and Napoleon almost meets his maker. The scene is fraught with conflict and tension as the story approaches the coming event from two directions —Dubois’ investigation and The Viper’s plan. It is interesting to see how these two approaches advance toward one another, arriving at the inevitable conclusion.

The appropriate problems and resolutions are laid out well, and the reader quickly turns the page to learn about success or failure. Although fiction at its best, the story provides just enough factual history to be a learning tool, while the fiction makes the read enjoyable and fast paced.