The Language of Dying 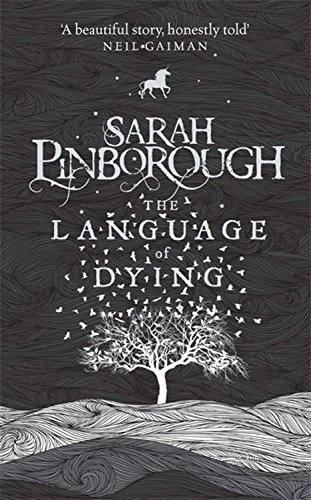 The lines between literary and genre fiction are not blurring together, they are being eliminated with the emergence of authors like Sarah Pinborough, a wordsmith of exemplary skill with both prose and plot. Booksellers will have a hard time categorizing fiction such as The Language of Dying as either literary or genre when both the prose is gorgeous and the plot is engaging. Maybe they should stop trying and simply enjoy beautifully wrought tales told with love, written by emerging literary giants of our time.

Sarah Pinborough is one such emerging author. Her novella, The Language of Dying, is a beautifully penned tale from the point of view of a woman caring for her father in his final days of illness. She recites the tale of her self-obsessed siblings, the truth of her abusive marriage, and the visitor that has come to her at her darkest hour, a phantom with red, glowing eyes that does not frighten her in the least. She is surrounded by people consumed with their own trivial problems and the beast comes for her, calling her wordlessly to a place where she belongs and feels loved.

The family dynamics, especially for such a short tale, are detailed and realistic, rendering each character three-dimensional on the page and, no matter how self-absorbed, each family member is incredibly sympathetic in their flaws, emotions and motivations. The narrator is the middle sibling, wedged between a charming brother; perfect, glowing, sister; and twin brothers that are both mentally ill and plagued with substance abuse issues. Even her father is a flawed figure with deep regrets and a penchant for escapism, either physically or through drinking.

The night the narrator’s mother walks out on her family, the narrator is visited by a phantom, a black horse with glowing red eyes that calls her to it from her bedroom window. It chooses her just as one of the most important people in her life rejects her.

The narrator’s isolation from her family, especially as she describes the severe abuse inflicted on her by her ex-husband, creates a longing in the reader’s heart for the beast with glowing eyes to appear and take her away. “It glares at me and I know that below it is whinnying, a deep throaty growl of a sound. A terrifying sound. I smile. I can’t help it. This instant I am full of joy, pure and bright.”

However, the narrator hesitates, and in a second the beast is gone, and she is found outside, crying hysterically in the mud. Her siblings all think she is mad, when she is really the most genuine character in the entire story, trapped between family that doesn’t know her or understand her because they are consumed with their own lives.

Pinborough’s character dialogue rings with an authenticity that makes the story almost cinematic in its realism. The Language of Dying is not a happy tale, the scenes dark and filled with the familiar emotions such as exhaustion and the guilt of waiting for a relative to die. Pinborough conveys the tone well through dialogue, accurate description, and well-paced action that jumps between the present and the narrator’s memories. The emotional intensity builds to an almost unbearable level and culminates in an ending that is incredibly satisfying.

Once again, the novella format has shown that it is best suited for the horror genre. With a length of just under 150 pages, The Language of Dying accomplishes emotionally what a much larger novel might struggle to sustain.

Although the book is beautifully written, the underlying plot is a red-hot wire of conflict as the interactions between characters build to a crescendo of tension and emotions. Anyone who has dealt with the death of a loved one and the false interactions that come with it, will know exactly how the narrator feels as she struggles with feelings of resentment and abandonment. Along that familiar story is one of the supernatural that is woven in with a light touch and seamless transition.