Dvorak's Prophecy: And the Vexed Fate of Black Classical Music 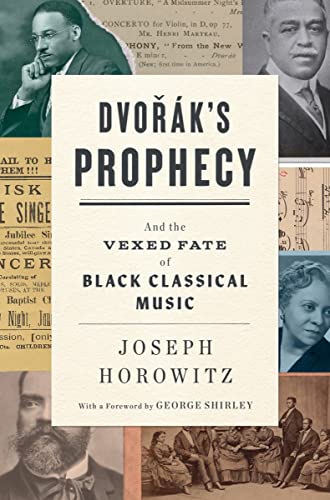 There’s a lot to argue with in Joseph Horowitz’s Dvorák’s Prophecy and the Vexed Fate of Black Classical Music.

First, his title promises a different sort of book from the one Horowitz has written. He begins with Bohemian composer Antonin Dvorák, who taught and composed in New York City from 1892–1895. During his time in New York, he wrote the popular Symphony #9 (“From the New World”), the Cello Concerto and the “American String Quartet.”

Horowitz is particularly interested in Dvorák’s proclamation that the great American music would stem from African American songs as well as Native American music. One would expect from his title that he would use Dvorák’s sentiments to write a history of Black classical music. Instead, the most important Black classical composers are given cursory attention while Horowitz particularly celebrates white composers Charles Ives and George Gershwin. Horowitz offers a lengthy celebration of Mark Twain’s novel Huckleberry Finn, which he sees as a literary corollary to Ives’s Second Symphony (“the first fully-realized ‘American symphony’”), in its use of the vernacular. Twain celebrated vernacular language; Ives celebrated vernacular music.

Horowitz, then, is not as much interested in Black composers as he is in composers who represent his ideal of building music on America’s usable musical past, which includes all forms of popular, classical, and religious music. This particularly includes African American musical sources: what he calls “sorrow songs” and jazz. He pays special attention to Ives’ Symphony, which incorporates American band music, folk music, popular song and Black spiritual into the European symphonic form. Horowitz lauds the fact that Ives’s symphony is a musical collage that does not contain one original melody. Gershwin’s opera Porgy and Bess is an ideal amalgam of Black and white, popular and classical, that celebrates its American roots.

For Horowitz, Ives’ and Gershwin’s modern works mine the American musical past within new, hybrid forms. They are, to him, superior to the Nadia Boulanger-trained modernists like Aaron Copland. While Copland’s most popular music, after all, does exactly what Horowitz calls for in its use of western songs and Shaker hymns, his self-composed style of appropriation can be, according to Horowitz, antiseptic or cheap. In other words, Copland is too tasteful in his appropriation of American vernacular forms. Horowitz prefers less tidy classical versions of American music—the “Emersonian mud and scum” of Ives’ work.

Outside of Russia where Shostakovich wrote symphonies into the 1970s, most modern and contemporary composers have moved away from the Haydn model classical symphony. Why does Horowitz still see that as a necessary model? For all his talk of a necessary amalgam of high and low culture, Horowitz is too exclusively invested in high culture.

Horowitz laments the moment when American musical institutions focused more on the performer than the composer. He notes that the making of Toscanini into a media celebrity through radio and recording meant that European music would be favored over American. However, he doesn’t discuss American orchestra’s continued reliance on European and Asian conductors who may not be so familiar with or interested in our own musical tradition. American conductors like Michael Tilson Thomas, Robert Spano, and the late Michael Morgan have been inventive in their programming of new American music and their focus on diversity. There are, unfortunately, very few African American conductors who have been given the opportunity to lead a symphony orchestra.

If Horowitz is going to focus on the relationship of Dvorák’s proclamations to large-scale forms like symphony and opera, then he needs to offer more detailed discussions of the work of African American symphonic composers beyond a paragraph or two. The first movement of Florence Price’s First Symphony shows the strong influence of Dvorák. However, she finds her own voice as the symphony moves on. Works like hers and those of her contemporaries deserve more analysis.

Horowitz also needs to deal more with the thorny question of white composers’ appropriation of Black music. He also needs to understand better the controversies that rage around works like Porgy and Bess. He is unsympathetic to contemporary writers’ critiques of the politics of composers and writers of the past. Yes, Charles Ives’s homophobia needs to be seen in historical context, but his gendering of masculine music as opposed to European “pansy” music is worth discussing.

In 2021, when an African American woman is composer-in-residence at the staid Chicago Symphony and the Metropolitan Opera is opening with an opera by a celebrated jazz composer, there is some hope for an expanded place for African American artists in the concert hall. They are likely to find expression outside of the traditional four-movement symphonic form.