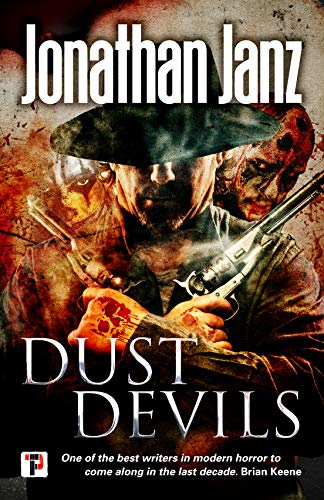 It’s New Mexico, 1885. Cody Wilson is like everyone else when the coach pulled by matching black horses rolls into Crooked Tree. He’s fascinated, even more so when he learns its occupants are a group of actors—Adam Price and His Travelling Players, they call themselves.

“He couldn’t look away from the six black horses towing a black carriage car. It seemed a rolling piece of hell, an emissary of darkness.”

Price offers Cody’s wife Angela a role in their production. It’s called The Return of the Maiden Carmilla, and that sends another zing of warning through Cody.

Carmilla is a story about vampires. Cody’s father is a prodigious reader, and he’s very familiar with the story, having finished the novel only a few months before.

“He’d only heard the word vampire in books but after watching the play, he knew several more facts about them. Cody knew something catastrophic had been set into motion.”

Before they leave Crooked Tree, Price and his vampires have devastated the town and taken Angela—now a sexual slave to Price as well as a vampire—with them.

Cody follows them, set on revenge. He witnesses the slaughter of Willet Black’s family, unable to prevent it. Cody and the boy join forces, attempting to save the people of Mesquite, the next target in the vampires’ path.

When Cody wonders if the townsfolk will listen or even believe what he says.

“These men,” the doctor said. “They apt to follow you two?”

“They’ll come,” Cody said, “But I wouldn’t count on ’em until nightfall.  They like the dark better.”

Cody meets Marguerite, owner of the town saloon, who offers sympathy and understanding, something he’s had little of lately.  She’s also pretty handy with a shotgun.

Then the vampires arrive and Cody has to watch a repeat of what happened in Crooked Tree, but now he has Marguerite and Will to worry about, also.

It’ll be a bloody battle with small victories and big defeats and plenty of heartbreak, and there’s always the question of whether the vampires are actually destroyed. Price’s men are different from the ones Cody has read about, for they seem able to survive whether decapitated, staked, or dismembered.

How can a man defeat something that won’t die, a creature already dead but still walking around, even without all its parts?

“Price and his men are tough, vicious, and amoral and they kill without batting an eyelash, but they aren’t characters in a penny dreadful. I’m not saying anything about what they are or aren’t. I just want you to think rationally.”

Cody hopes he knows the answer.

“Always plan for the worst, boy. Then the best will be a pleasant surprise when it comes, but planning for it is a fool’s move, so stay sharp!”

Jonathan Janz has done it again!

When working within a well-known genre, he takes it over and makes it his own, and he’s done exactly that with Dust Devils, a vampire Western in which the nosferatu are unique. His Undead are more the Salem’s Lot than the Dracula kind—relentless and heartless revenants seeing humans as nothing more than their next meal. Nothing suave or even remotely well-mannered about these guys—or subtle. They’ve certainly never seen a set of white tie and tails, though there’s a hint Price may have had more opulent days elsewhere.

As usual, Janz’s heroes are particularly ordinary by contrast—a young rancher and an even younger boy—but they possess their own brand of courage and the desire for revenge spurring them on.

Some scenes may be a little much for the squeamish reader, for Janz  doesn’t spare the blood or mayhem, but surely those who read this genre and this author know what to expect, so they needn’t be surprised.

Even if the stage wasn’t already set before the title of the play is announced, the mere mention of “Carmilla” will immediately put horror novel devotees on alert that what follows will be Janz at his best.

There are the author’s usual good descriptions, with great depth of characterization as well as delving into the psychology of both antagonist and protagonist. All in all, it’s a good example of vampiric disregard for human life and that’s what the story is all about: survival by the determined against creatures considering themselves at the top of the food chain.