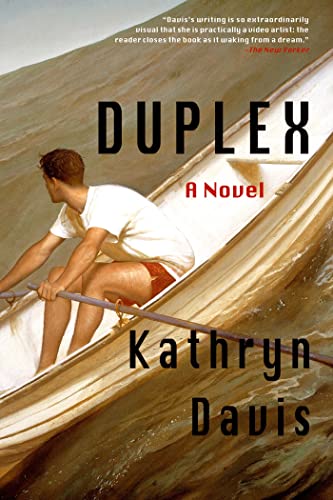 Somewhere in a fantastic future, robots and non-human “aquanauts” live shoulder-to-shoulder with humans, stuffed animals magically animate into babies, and the laws of logic are shelved. Somewhere in a drab present, people live claustrophobic, unfilled lives in a going-nowhere suburb on the outskirts a going-nowhere city. At the confluence of these two universes sits Kathryn Davis’s cerebral new novel, Duplex.

At the center of Duplex are two high-school sweethearts, Mary and Eddie. Although everyone seems to know they belong together, a collection of terrestrial and supernatural forces conspire to keep them apart. Some of these characters include Mrs. Vicks and a strangely sexual man called the Sorcerer create barriers, and a strange collection of ordinary and extra-ordinary neighbors, including a self-conscious female robot named Cindy XA, and a clique of aquanauts.

Professor Davis is capable of beautiful sentences and turns of a phrase. As sheepish Mary looks at herself in the mirror, the author narrates: “She [Mary] smiled before she remembered that she couldn’t stand the sight of herself smiling.”

Professor Davis paints a landscape with equal skill: “Now the stairwell window gave an unbroken view dotted with barbed gray-green shrubs, the earth’s curve at the horizon so feint it was almost invisible but undeniably there, a queenly entourage of clouds in procession above it.”

There may be 40 or 50 sentences and images in Duplex that are this good.
Yet while Professor Davis is undeniably a highly skilled author, Duplex reads sluggishly. Although only 250 pages, the book feels bloated. Chapters meander through dreamy sequences and scenes end abruptly without advancing the story. Professor Davis could have removed 50 pages from this book without damaging it.

Alternatively, Professor Davis could have put a little more action into Duplex. Virtuosity is a wonderful gift, but it is a means to an end, not an end unto itself. Even Shakespeare understood the need to make concessions to the proletariat tastes of the groundlings in the cheap seats.

The intermingling of the mundane and the fantastic at the core of Duplex challenges the reader’s preconceived notions. Even readers who don’t gravitate toward science fiction expect a level of the fantastic when they start reading about robots and aquanauts. On some level, we are all Pavlov’s dogs; when the bell rings, we expect to be fed.

With Duplex, Professor Davis sets out to do something very bold: apply the small town realism of Thornton Wilder or Sherwood Anderson to a setting filled with sci-props. Her remarkably non-remarkable treatment of a rusting suburb on the edge of The Twilight Zone is at once interesting and off-putting.