Dumpty: The Age of Trump in Verse 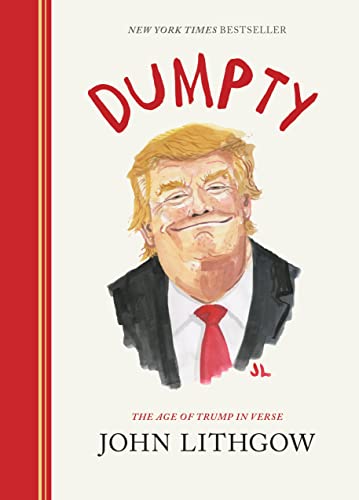 “A prolific writer and award-winning actor, John Lithgow has penned a laugh-out-loud picture of American politics at its worst. And yet, through the laughter comes a sense of despair.”

Marrying politics and poetry is a difficult enough task, but add humor on one side, bleakness on the other, and decorate it with commentary on today’s state of affairs in Washington, DC, and you have Dumpty: The Age of Trump in Verse by John Lithgow.

Lithgow has taken rhyming poetry from the likes of Robert Burns, Lewis Carroll, John Masefield, and even Mother Goose, (to name a few) to describe to the reading public what America has endured for almost four years. At times one finds oneself almost singing along with Gilbert and Sullivan.

A prolific writer and award-winning actor, Lithgow has penned a laugh-out-loud picture of American politics at its worst. And yet, through the laughter comes a sense of despair.

He starts with Donald Trump’s first campaign promise when he writes:

To stir up a rabid political brawl.

His Republican rivals, both feckless and stodgy,

Succumbed in the end to his rank demagogy.”

It seems that no one is immune to Lithgow’s stinging wit. Those in the American spotlight and those elsewhere in the world. And for those who do not follow the political banter in today’s news, Lithgow provides a brief detailed explanation of those about whom he is writing at the end of each poem.

While certainly not everyone will find humor in Lithgow’s poems, it’s really hard to not laugh at his writing. Granted, some things might go a bit astray:

Four men in a jeep,

Dumped by Dumpty, the worst of his species.

Their honor is lost

For they’ve learned at their cost;

All he touches he turns into feces.”

This is a book that is read in one sitting and to say it is an education in American politics would be an understatement! And while it is obvious that Lithgow’s feelings about Trump are something less than positive, his poems are facts pulled right out of the headlines. He makes a point of putting truth in his poems, even when it paints a dark picture:

“We are living, alas, in the Dumptyan Era

Where scandals erupt by the hour.

They stir a recurring and queasy sensation,

A virus infecting the health of the nation,

Brought on by a toxic and foul combination

Of money, perversion, and power.”

It would be a challenge to pick a favorite poem of the many that Lithgow has penned here, but certainly a good one would be:

The most vapid and vacant of vice presidents.

A poem? Alas, at the end of the day

Quite frankly, dear reader, there’s not much to say.”

This book is a keeper, to be read and enjoyed on numerous occasions.