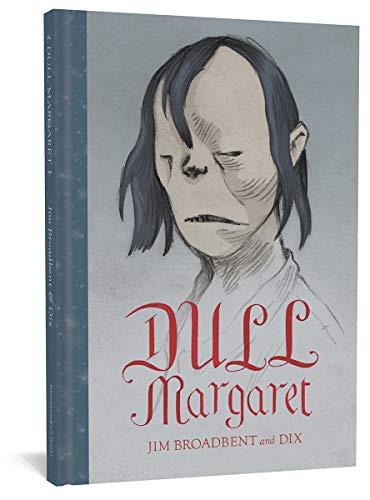 This is a graphic novel with a difference. The story is loosely based on a 16th century painting by the Flemish painter, Pieter Bruegel the Elder, titled: Dulle Griet. Dulle Griet or Mad Meg was a peasant who led a group of women into hell. The painting shows a woman with a sword advancing toward hell while her female followers look like they’re vandalizing a home. Bruegel may have been referring to the witch hunts that were prevalent in Europe in the 16th and 17th centuries. It seems like the authors wanted to depict what Margaret’s life may have been like when they saw this painting.

Unlike other graphic novels, the subject is dark and depressing. The first two pages show a naked woman lugging a rope toward a boat. She climbs into it and sails toward a cabin. The next few pages show her cooking food over a fire, her face a glowing pink. These pages have no dialogue. In fact, there is very little dialogue until page 69. The expression on Margaret’s face tells us that she’s struggling and angry. When we get further into the book, we see Margaret yelling at someone. She repeats her words: “Come on! Come on! Eh Up, Eh Up.” Her speech is that of an uneducated peasant.

With contour line and color, the authors give expression and feeling to their characters. For example, Margaret’s face shows sadness, loneliness, anger, confusion and worry.

The drawings are so graphic that we’re able to follow Margaret’s mind as it begins to unravel. Broadbent and Dix inject some humor when Margaret talks in nursery rhymes: “Alig- Salig, Wasp Stings, Olig-Folig, Flea Itches, Wontro-Hentro, Din Din Dan. Bring me a friend to love as soon as you can.” This technique gives us some relief from the depressing story.

Meg’s soul is so tortured that she cuts the hand off a man who is swimming in the water. When she meets another damaged soul, she ties him up in a hammock and throws him around, beats him with a rope, makes him climb a tree, and feeds him mush.

She doesn’t know how to befriend another person. She calls out: “I did call, I did . . . My name is Margaret, I’m Margaret.” She wants to take revenge on those who treated her badly. Although she’s so needy, when a group of people invite her in to eat, she says: “I do bear grudges. I have an awesome temper on occasion.”

Margaret is confused about her self-esteem. At one point she states that she’s worth it. “. . . you mustn’t take me too seriously because I’m not worth it.” Then later she states: “Well, I’m worth it . . . I don’t know why I said I wasn’t.”

She builds a scarecrow thinking that it will protect her from those evil people who tortured her. Page 108 has a scene similar to Bruegel’s painting. We see Margaret holding a box at a large opening and skeletons coming up from hell to haunt her. This is a scary scene. At this point Margaret is finding the world unsparing when she tries seek kindness and compassion.

When she finally admits that she loves the man whom she tortured, it’s too late.

This book has all the elements of a graphic novel. Every page has boxes of varying sizes with full color illustrations, the colors and contour lines covey the mood of the characters and dialog is minimal, leaving much to our imaginations. There is one page that shows Margaret’s face in longitudinal lines as if she were looking into a distorted mirror. It’s also a good read.

Some questions came to my mind. Is Margaret a witch using fire to purge her soul? Or is she schizophrenic and a sadist or sado-masochist? Is she just a damaged soul looking salvation? Or is she knowingly greedy and selfish? Is she a demon looking for hell? Or is she just needy and lonely?

Jim Broadbent incorporated images from Goya’s witches, Daumier’s pictures of travelling players, and Rembrandt’s country landscapes. Dix is a cartoonist, best known for his cartoons in the Guardian.