Duke: A Life of Duke Ellington 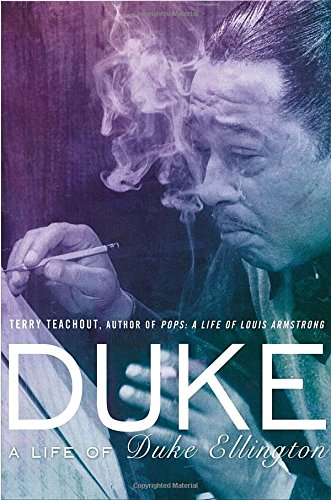 Teachout conveys right away that Ellington remains one of the most elusive figures in the pantheon of jazz giants. During his life, Ellington refused to be couched in one category as a musician or as an individual. Edward Kennedy Ellington got the name Duke early on because of his royal ways, and like all smart royals, he stoically held as many trump cards as close to his heart as possible.

As Teachout demonstrates throughout this book, Ellington may have been larger than life, always a star, but he was essentially a simple man: He wanted things his way and did what was necessary to make that happen.

If things got complicated or messy, he moved on. Ellington’s life was complex and deliberately contradictory, and Teachout admirably delves into the composer’s turbulent life without trying to dissect his contradictory nature. He may have been impeccable onstage, for instance, but was always running late and so unorganized, sometimes dressing in a hall as he ran to get the performance.

This is an earthy and scholarly investigation that counters some of Duke squeaky clean image but without tarnishing the man or his artistry. Teachout reveals, through interviews with the composer’s contemporaries and his son Mercer, many of the personal dramas in his father’s life.

He compartmentalized his private life and never felt he had to explain what he was doing or why—especially to a prying press. Ellington had a constant stream of affairs, one-night stands, and backstage quickies, not to mention multiple long-term relationships with women. He never divorced his first wife even though they lived apart for many years.

The book opens at a pivotal musical event in the composer’s life and the history of his band, the debut of Black, Brown and Beige, Ellington’s symphonic narrative of African American history spanning centuries.

The episode provides a portrait of the composer that no one expects: a procrastinator who knew this important premiere was coming up, had talked about its import months before to reporters, and was framed as being his orchestra’s first performance in Carnegie Hall. In fact, the composition was cobbled together at the last minute and earned disdain by the white press while being validated as a masterpiece in the black press.

To those in his orbit, Ellington displayed many contradictions; he was egotistical, but loyal personally and professionally. Ellington famously took credit for others’ work, most glaringly from his compositional equal Billy Strayhorn.

Teachout solves, piece by piece, the methods Ellington used that raised eyebrows and caused resentment among his musicians. If a musician introduced a melody or harmonic idea in a solo, Ellington would run with it, further develop it orchestrally, and slap his name on it.

Teachout’s incisive account of Ellington’s often-complicated musical relationships with his band members is rescued musical history in the annals of jazz writing. Ellington’s musicians were so integral to the composer that he never got rid of anyone, whether they showed up late on the bandstand, drank, or did drugs—indicative of Ellington’s contradictory nature as both meticulous and chaotic.

Duke: A Life of Duke Ellington is a thrilling backstage book including details of Ellington’s cyclonic life driven by the ups and downs of constant touring and studio recordings. Teachout chronicles all of The Ellington Orchestra’s important performances from Harlem to Newport as well as the international tours as musical ambassadors. He vividly brings to life the world of touring by a black band in a segregated America.

Teachout adds to the critical understanding of Ellington’s music with a comprehensive critical analysis—without doubt a must read for all jazz students, musicians, and anyone who wants a three-dimensional picture of the man, his mystique, and his music.