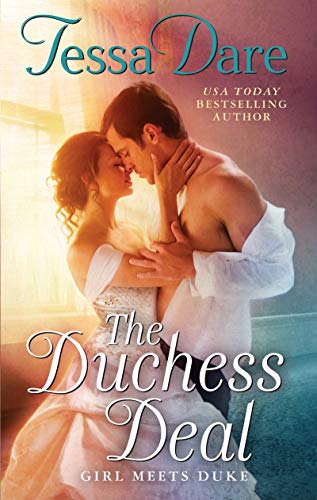 “not only a lovely Regency rendition of Beauty and the Beast but a delightful laugh-out-loud story as well . . .”

Before the war, the handsome Duke of Ashbury was engaged to be married. After the battle of Waterloo, he’s still a duke, but good looks and fiancée have fled. When he’s not roaming Mayfair’s dark streets, defending hapless victims from footpads, he broods in his London townhouse, much to his servants’ dismay.

“Beneath the Before and After sketched on his face, there was a man—a hurt and lonely man—who remained unchanged in essentials.”

Ash knows he has to marry and provide an heir to his title. Otherwise his profligate cousin will inherit and waste his fortune. “‘If I died tomorrow, everything would go to my cousin. He is an irredeemable prat. I didn’t go to the Continent, fight to preserve England from tyranny, and survive this’—he gestured at his face—‘only to come home and watch my tenants’ lives crumble to ruins.’”

Where to find a woman who’ll be insane—or brave—enough to marry a monster?

Fate provides an answer when seamstress Emma Gladstone demands Ash pay for the wedding gown his former fiancée ordered, then refused to buy.  Ash does her one better: He offers to make Emma his duchess.

Emma’s reaction? “The man was cynical, insensitive, condescending, rude, and she was definitely going to marry him.” Thus, a battle of hearts over minds begins.

Emma is as determined as she is beautiful. She agrees to Ash’s terms, the most important being that they don’t fall in love, and then proceeds to break all the rules. She attempts to draw Ash out of his shell of self-protection even as he fights against that.

Oneupmanship is a game of which he’s a champion and over a set of badminton, he proves it.

“‘I warn you. I don’t give up,’ she said.
‘I warn you. I am more stubborn by far,’ was his reply.
‘I left home at sixteen.’ Emma served, barely managing to scrape it over the net.
‘I was orphaned at eleven.’
‘I walked to London by myself. In the snow.’
‘I marched a regiment to Waterloo.’
‘I made a new life on my own. Begging for work.’’
‘A rocket exploded in my face. The scars made me a living monster.  My intended bride left me in revulsion. I quit opium by sheer force of will. I’m still here.’ He struck the shuttlecock, driving it into the parquet. ‘I win.’

In the process, she strips away the brooding, self-pitying layers and reveals the man beneath, a man wanting to love but believing no one can love him in return, while at the same time, fearing someone actually could.

“‘It’s not pity or distaste that worries you. You’re not afraid of rejection. You welcome it. But if you’re seen for everything you are—the strength and the flaws, the beauty and the scars—you might have to believe you’re wanted. Loved. Really, truly, honestly . . . completely.”

In the end, Emma will force Ash to leave the protection of his home and venture again into Society to defend her and right the wrongs done to the woman he’s come to love.

“No matter that he deflected any suggestion of decency with a jaded, biting humor, and had determined to convince the world of his monstrous nature.  He wasn’t a saint and he wasn’t easy to live with. But he did possess a heart—a large and loyal one—and some part of it was now committed to her.”

This is not only a lovely Regency rendition of Beauty and the Beast but a delightful laugh-out-loud story as well. Author Dare should be called the “Mistress of the One-liners,” for the exchanges between Emma and Ash are not only pithy, charming, and witty as Regency novel dialogue is expected to be, but also as funny as they are well worded.

Secondary characters are well delineated. Trevor, the “Monster of Mayfair’s” young follower, Lady Penelope and her little circle, and Ash’s servants, all not above a bit of scheming to force the duke into a long hoped-for romance with his wife of convenience, are deftly and delightfully depicted with large doses of humor.

For those who like their romances in the Regency style, this novel is perfect. Its only flaw is that eventually, it must end—though the reader will wish it could go on forever. With an ending that serves as a Prologue to the Epilogue, the story comes to its finish in a way readers will applaud.

Most Regency novels are delights, but The Duchess Deal is more than that as it brings to life once again that well-known fairy tale with its moral that beauty is only skin deep, and it takes a determined woman to prove it.