Drugs Without the Hot Air 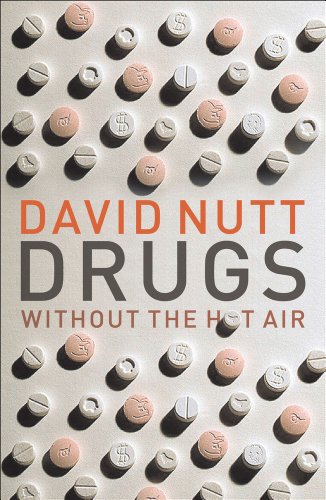 “. . . one wonders why there are no similarly informative, unbiased books about drugs in the U.S.”

Drugs Without the Hot Air is a scientifically based, politically neutral primer on many common legal and illegal drugs used recreationally. Although U.K. focused, this book provides a wealth of valuable information for a U.S. audience. There are notes and references at the end of each chapter and a list of URLs at the end of the book.

Written in clear, plain language Drugs Without the Hot Air is guaranteed to hook readers in its first 20 pages. The narrative begins in October 2009 when David Nutt, a member of the Advisory Committee on Safety of Medicines, gave a lecture followed by a radio interview. The topic? What he believed to be a wrong-headed change in drug policy. Cannabis had been recently upgraded from Class C to Class B in the U.K., signifying greater harm with greater penalty for possession.

After going public he was asked by the Home Secretary (a position similar in the U.S. to the combination of the Secretary of State and U.S. Attorney General) to resign from the ACMD. Dr. Nutt refused and was fired. He was not the only one. The Chief Medical Officer (CMO) of the U.K., the most senior advisor on health matters was forced to leave his post after warning about the growing medical costs of alcohol abuse. The CMO’s offense was in recommending increasing the price of the cheapest drinks.

The ACMD had not always been subject to political ideology. During the U.K. HIV/AIDS epidemic in the 80s, the ACMD recommended a needle exchange program that was successful in reducing HIV among injecting users. Although the ACMD has had its advice accepted in the past, it has recently seen pushback in getting politicians to accept its recommendations for drug reclassification in the light of new evidence.

The greatest difficulty politically with attempts to reduce harm from drug use is that it may be seen as encouraging drug use (as for example with needle exchange). As a result policy makers in the U.K. are less interested in reducing harm as being seen as tough on crime. U.K. drug policy is principally geared towards reducing the total number of users rather than the total amount of harm.

Humans use drugs both medicinally and recreationally; and even though international treaties have created a strict legal division between the two, humans are natural pleasure seekers—and we simply don’t know how to stop drug abuse. Experimentation with drugs is largely determined by social norms and cultural trends—not by stricter laws. The tactic of criminalization deters casual but not heavy users, while it is just this category that suffers (and causes) the most harm.

In the chapter “Is Ecstasy More Dangerous Than Horse Riding?” David Nutt again raises controversy. In the U.K., there are approximately 5,700 cases yearly of traumatic head injury from horseback riding accidents, one serious accident per 350 hours of riding. Dr. Nutt compares this rate to the yearly hospitalizations for ecstasy abuse and concludes that accidents from horseback riding and ecstasy abuse are roughly on the same order of magnitude. Using this statistical comparison he wrote a “tongue-in-cheek” article for Lancet, the U.K. medical journal, calling addiction to horseback riding as “equasy:” equine addiction syndrome.

There were serious points behind the humor: criminalizing risky behavior may not always the most appropriate way to combat drugs, the drug debate takes place with no reference to other causes of harm, and drugs are only subjectively more harmful than other risky behaviors.

When the article was published in 2009 he was called out by name by the Home Secretary in a speech in Parliament with a comment that drug use and horseback riding were “completely incomparable” and that Dr. Nutt was in the “wrong job.”

The legally recognized classes of drugs are few: opioids, stimulants, depressants, and psychedelics—though there are less easily classified drugs including: ecstasy, ketamine and cannabis. The author provides an alternative to the current policy of blanket criminalization in the U.K., one that instead ties criminal penalties to relative harm.

The author takes these harm categories and invited an expert panel of professionals in different fields—those who work with drug users and drug research including chemists, psychologists, psychiatrists and general practitioners—to come up with a relative ranking of 20 common legal and illegal drugs. Factors are weighed and “sensitivity analysis” is applied as a test to make sure harm rankings are stable—that is, if one weight changes slightly the overall ranking does not change greatly.

Ranked by overall harm with lower numbers indicating less harm, the list of ranked drugs include amphetamines, cocaine, tobacco, alcohol, benzodiazepine, cannabis, heroin, methadone, ecstasy, LSD, mushrooms. (As I type this list I’m imagining digital alarms being triggered all over the Internet—perhaps even now as you read this page—and don’t forget to delete your cache when you are done!)

At the high end of the scale, tobacco ranked 90 in harm. At the low end, mushrooms garner a ranking of 1. In between, alcohol scores a 72, while heroin and crack cocaine rank 55 and 54 respectively. Lower down in the ranking, methamphetamines rank 33.

Dr. Nutt points out the lack of relationship between harm ranking and current U.K. legal classifications, and identifies the limits of this model: that harms are listed but not benefits (such as tax revenue) and that the model treats users as a homogenous group and does not address poly-drug abuse.

The ranking was published in the U.K. medical journal Lancet in 2007 and when the report came out claiming alcohol was more harmful than heroin or crack, the study was then reported across U.K. press making the front page of the Guardian. And as I type this review up, I see from Google that the U.K. is indeed increasing the price of the lowest cost drinks.

David Nutt picks out a select sampling of drugs and provides a (U.K.) cultural history of their use. Ecstasy’s use began in dance clubs. Its users tended to mix ecstasy with other drugs, and the “rave culture” attracted drug dealers, all of which lead to the perception that ecstasy was exceedingly harmful. Ecstasy became known to the authorities after users suffered death from dehydration. When warnings were put out to the dance clubs, deaths then occurred by users drinking too much water.

One can obviously see the opportunity for a serious, mature dialogue among authorities, medical researchers, and anti-authoritarians being avoided. The U.K. does not recognize any medicinal use for ecstasy despite evidence that it is effective for a select number of chronic treatment-resistant disorders, for example post-traumatic stress disorder (PTSD). An estimated 18% of soldiers returning from Iraq and Afghanistan are believed to have PTSD, and a study showed an 83% rate of improvement using ecstasy versus 25% treated by placebo.

Up to the 19th century, alcohol abuse was considered a sin of excess akin to overeating. Abusers were considered not sick but morally weak, and even the possibility of tobacco addiction was not recognized until the second half of the 20th century.

Until scientists attained greater understanding of how the brain worked could society hope to understand the mechanisms of addiction and abuse. Not until addiction was recognized as a medical condition did the science community begin to study the traits that affect vulnerability and begin therapies to treat drug addiction.

If alcohol were discovered today would it be legal? In evidence against, the author lists the tragic consequence of alcohol abuse in the U.K. Yearly, there are 40,000 deaths, 1 million hospital admissions, 7,000 traffic accidents (with 500 deaths), 1.2 million violent incidents, and 500,000 crimes that cost the police 7 billion pounds. Alcohol has been attributed to the cause of 40% of the reported incidents of domestic violence and 50% of child protection cases. An estimated 3.5 million adults in the U.K. are believed addicted to alcohol. This is a whopping 41% of the population!

Cannabis has been used by humans for thousands of years for its fiber (hemp), medicine (for relief of pain and spasm), and for pleasure. Cannabis first became popular in Britain in the 1840s (though way overshadowed by opium) by an army surgeon who had served in India.

Cannabis was believed prescribed to Queen Victoria to help with period pains. Though cannabis was outlawed in Britain along with cocaine and morphine in the early 1900s, the author claims that 1% of Britain currently self-medicates.

Illicit drug suppliers will make up new substances to avoid drug laws. Mephedrone or “meow meow,” is a designer drug that was originally used for pest control and produces effects similar to amphetamines. The author claims that mephedrone was banned in the U.K. due to political pressure and not evidence of harm.

In comparison, New Zealand has a Class D category for unclassified substances. The point of having Class D is for protecting young adults from the consequences of harsh drug laws, in which a drug conviction would be more damaging than being caught with an unclassified drug.

Drugs Without the Hot Air is not just very readable but also provides material for talking to your kids. There’s a chapter expressly for this purpose, “What should I tell my kids about drugs?” And one wonders why there are no similarly informative, unbiased books about drugs in the U.S. One can again see the opportunity for having a serious, mature dialogue among authorities, medical researchers, and the rest of us being avoided.