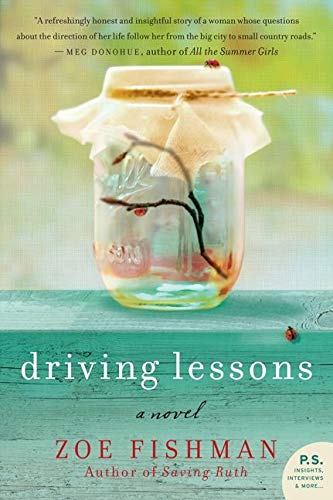 “Zoe Fishman’s Driving Lessons is a sparkling comedy with a heart. . . . a delightful start to spring 2014 book releases!”

“Is it weird for a 36-year-old woman to take driving lessons?”

It doesn’t really matter because Sarah is between a rock and a hard place. A long time New Yorker, her recent move to Farmwood, Virginia, has come with a price: Unless she wants to spend her days trapped in her suburban neighborhood, she will have to learn to face her fear of piloting an automobile.

Along the way, she comes to face some of her other fears: feelings of inadequacy as a daughter, insecurity about her looks, separation from her best friend, and most of all the fear she feels about being a parent.

Lucky for the reader, Sarah is accompanied by her loving husband, new friends and old, and a surprisingly supportive mother. All of the secondary characters are drawn very well, up to and including her wise man driving instructor Ray.

It would have been easy to slip into stereotypes: the Superior New Yorker, the Folksy Southern Neighbors, the Bitchy Rival, and indeed Fishman plays with these tropes.

Sarah and her husband Josh are smugly sure that New York has the “most beautiful and sophisticated people in the world;” Sarah’s boss in Farmwood has the appearance and accent of Paula Deen on her worst day; and Iris, Josh’s colleague, is not only beautiful and accomplished, but she’s free from pressure to have a child. It’s a delight to watch Fishman tear down her own straw men, though: she takes sly digs at New Yorkers’ belief that “the America outside of [New York] didn’t really exist, unless of course you were talking about Los Angeles;” the Paula Deen clone reveals depths of understanding and sophistication that are heartening; and Iris . . . well, Iris turns out to have her own problems.

Sarah herself is a delightful Everywoman. She’s funny, vulnerable, and not inclined to putting up a façade. Though she might not be entirely honest with Josh about her reluctance to be a mom, it’s for the best of reasons: She cares about him and doesn’t want to welsch on an agreement have a child they’d made years before.

Ray observes early on that, “You’re interesting, Sarah. A little self-involved, maybe, but interesting,” and it’s easy to agree with him. Sarah’s self-involvement is evident, but it’s not off-putting, because she’s aware of it and trying to change.  Josh gently reminds her a few times not to be a snob; Sarah replies, sighing, “I can’t help it. It’s part of my DNA.” Honest self expression is definitely not her problem.

Especially refreshing in Driving Lessons is the relationship between Josh and Sarah. They are obviously in love and devoted to one another, they have a wonderful ability to be silly with one another, and the chemistry between them is palpable. With no sturm and drang of a strained marriage or a tease of infidelity, it is easy to enjoy their easy, strong relationship and to become absorbed in Sarah’s journey from feelings of inadequacy to real security.

Zoe Fishman’s Driving Lessons is a sparkling comedy with a heart. From beginning to end, Sarah is a believable, likeable protagonist, and her story is absorbing. Did I mention it was funny? I dare anyone to read Sarah’s sister in law’s depiction of childbirth and sex afterward and not have their sides aching from laughter. This is a delightful start to spring 2014 book releases!