Drinking at the Movies 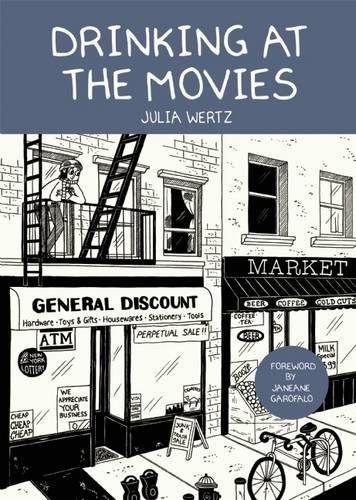 Drinking at the Movies by Julia Wertz is an interesting comic memoir of living in New York as a poor, desperate, and whiskey-addicted comic artist trying to make it. While the entire book is, as Wertz’s admits in her introduction, nothing new (there are plenty of memoirs and autobiographies in comic form) the story of Wertz’s year in New York as she generally fails at life, from constantly looking like she could blend in with the homeless to her persistent bad choices and self-indulgent whims, is amusingly self-deprecating.

The graphic memoir could have used some tighter editing in some of the tangents, such as the inserted Sherlock Holmes and Dr. Watson sketch in which they search for Ms. Wertz’s brain, which is a diversion and not particularly entertaining. Overall, the repetition of routines and failures becomes monotonous.

The navel-gazing and ability to plow through (or deny) anything when someone is in their twenties is often strong, and in Ms. Wertz it is of Jedi-quality, most likely thanks to her alcoholism. Understandably, there is a lot of growing up for Julia Wertz to do as shown in the comics, and not necessarily in the stereotypical way of finding a single, steady job, but in getting help for her depression and alcoholism, facing the guilt, anger, and self-loathing, and acknowledging and working on improvement of the entitled attitude. However, growing up is something the author claims happens to her toward the end of the book.

Drinking at the Movies was originally release in 2010 but was redesigned and re-released in 2015 by Koyama Press with a new cover, a handwritten introduction by Janeane Garofolo, and added city drawings at the end. Wertz is also the author of Fart Party Vol 1 & 2, The Infinite Wait & Other Stories, and Museum of Mistakes. The pen and ink drawings are neither spectacular nor awful, but the cityscapes that create interludes in the memoir are architecturally detailed and showcase Wertz’s illustrating talent. Drinking at the Movies was nominated for an Eisner Award in 2011 for Best Humor Publication.

This graphic memoir will be enjoyed most by Wertz’s dedicated fans as well as those readers who look back on their twenties with a sense of empathy for their younger selves and like to read about others’ misadventures. Readers who have enjoyed Daniel Clowes’ Ghost World or Alison Bechdel’s Fun Home: A Family Tragicomic, or who like tales of trying to make it in New York will enjoy Drinking at the Movies.

Wertz is a darkly humorous Charlie Brown: the world keeps happening to her, for good or ill, despite attempts to either conform or let it flow by, and if, perchance, Charlie Brown took up drinking and said “fuck it” more often when Lucy pulled the football from him.