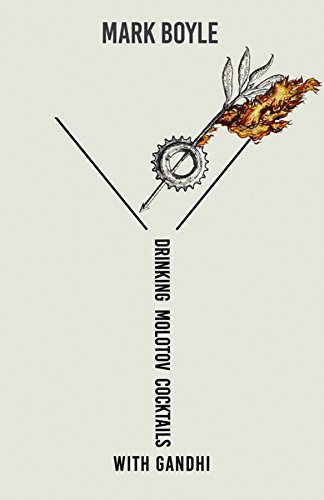 Mark Boyle has penned an incendiary fulmination against the aggressions of consumer capitalism. In this provocative polemic, he calls us all to account for our lack of violent resistance to the ravages occurring on every corner of the globe to feed our most trifling wants. Drinking Molotov Cocktails with Gandhi is solidly written in easygoing prose, and on a fundamental level forces the reader to dig deep into the bowels of their consciousness to question how we can let such slaughter occur in our name.

His main point of contention is what he perceives as a commitment to nonviolence by the vast majority who espouse preserving the environment. Boyle finds this nonviolence to actually play into the hands of those who are the most rapine, as its toothlessness provides almost no brake to the incessant wanton destruction, while allowing cover in the form of greenwashing to carry on business as usual. If for nothing else, the book is worth reading to force us to confront a most profound philosophical question: At what point does stopping the destruction of the earth, upon which all life depends, become self-defense and hence justify violent resistance against the forces that are destroying it?

The book would be overly long, certainly reducible to a long essay, except for Boyle's entertaining anecdotes. It does, however, take him a chapter or two to really get into his own.

The first chapter, especially, overly romanticizes prehistoric hunter/gatherer culture (this is the same culture that obliterated all the megafauna in North America from overhunting in just a few thousand years), and seems to yearn unrealistically for a return to such a simplistic state. This kind of treacly hogwash is hard to swallow, yet we are forced to subsist on this vision, as Boyle offers no realistic alternative to the way we live now.

While this is maddening, it would be a mistake to put down the book at this point because of this deficit. There is an argument to be made that promoting the destruction of the current system without offering a realistic alternative is the height of irresponsibility, as at least the foundation of a regulatory system now exists that can provide some protection to what remains of nature. Violence against the state and/or industrial complex certainly has the potential to exacerbate the problem if all it does is offer more reason to crack down on “eco-terrorism” without providing any strong physical defense to helpless nature.

The book also falls short when it comes to defining the nonviolence it is against. Nonviolent environmental groups are lumped together with nonviolent protest, yet there is a fundamental distinction here that Mr Boyle doesn't piece apart. While it's easy to call Sierra Club executives hamming it up with politicos in Washington useless and in cahoots with the enemy, this is a very different form of nonviolence than, for instance, using human shields to block entry to a coal train trying to load, or tree-sitters refusing to allow old growth forests to be felled. There is little to none of this latter type of environmental nonviolent resistance today, and maintaining the moral high ground is much easier using such methods than violent resistance.

Likewise, Boyle does little to identify potential targets and makes no distinctions of scale or purpose to help any potential resisters make sense of what might be the most effective way forward. Perhaps that is for a later book, but by painting all corporate enterprises with the same broad target sign, he opens up the possibility of poorly thought out attacks that would be very unpopular with the public.

For instance, targeting coalmines or clear cut logging companies would generate a fair amount of sympathy. Instead, near the beginning of the book he uses the example of an ambulance and its inherent violence in manufacture and operation. The point he is trying to make is that even the industrial infrastructure we set up to do good harms the planet, but it could also be seen by readers as identifying a potential target for destruction, in addition to making the author come across as heartless and indiscriminate. Indeed, the Molotov cocktail of the subtitle is apt, as it is this kind of carpet-bombing approach that Boyle ultimately seems to be advocating for. While there are other shortcomings, it is this glaring irresponsibility that is the book's major flaw, whether it is his intention or not. His romanticizing in the first chapter of hunter/gatherers seems to suggest this is his ultimate goal.

Ultimately, more than any other kind of book, writing a call to action that would put one's life and liberty in such direct danger will force some degree of scrutiny upon the author. To pen such words all but requires some degree of action by the author in accord with his stated beliefs in order to not just be toothless yammering. Regardless of whether that occurs or not, Drinking Molotov Cocktails with Gandhi is a timely book, worth the short effort it takes to read for focusing us on such relevant and soul-searching questions.

Stephen Hren is an author whose most recent book is Tales From the Sustainable Underground: A Wild Journey with People Who Care More About the Planet Than the Law. Articles have appeared in Homepower and Backwoods magazines. He is also a professional restoration carpenter and teaches sustainable building classes at Solar Energy International.