Drinking Closer to Home: A Novel 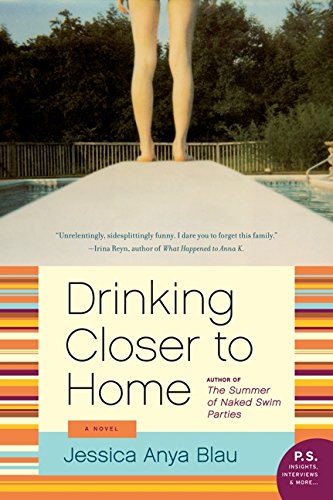 Anna, Portia, and Emery return home after their mother, Louise, has a massive heart attack. Staying at their parent’s house with their father, Buzzy, memories of the past swirl around them like the blue-gray smoke of their mother’s ever-present cigarette, while the future looms large with the unknown.

In addition to dealing with the issue at hand, each member of the family is at a pivotal point in their life. For Anna, recently having a baby hasn’t quelled her desire for extra-marital affairs, whereas Portia has just been blindsided by her husband’s infidelity with a thinner, younger woman. Emery and his partner Alejandro are deeply in love and want a baby; Emery plans to ask his sisters to contribute their eggs for the cause. Meanwhile Buzzy—trying to salvage something of his life after decades of an unfulfilling marriage—is having an affair as his wife teeters on the edge of death.

Drinking Closer to Home gets its title from the maternal grandparents’ faux pas of getting drunk at a bar, then going to a hotel for a night of naughtiness, inadvertently leaving their infant daughter, Louise, in the back of the convertible with the top down during a snowstorm. The lesson they learned? Drink closer to home. As shocking at this may sound, it’s just par for the course.

Perhaps Louise’s near-fatal experience affected her maternal instincts, as her own parental trespasses are fairly epic in their own right. An artist and pot-smoking-hippie-chick, Louise has produced three offspring that she neither has the time nor the interest in nurturing. Coming to the decision that she’ll just “quit” her housewifely duties, Louise relinquishes responsibility for the care of her home and her baby son to her pre-tween daughters.

At times the family seems more like five people who met on a train, rather than biologically related. With Buzzy being the only breadwinner and the housekeeping left to children—not mention the raising of a little boy—the results (not surprisingly) are disastrous. There’s little empathy or sympathy in this family; it’s survival of the fittest—Lord of the Flies style.

With little regard to feelings (or long-term emotional damage), the family has no qualms about ganging up to mock any family member about their failure, shortcoming or personality quirk. Emery’s nervous concern and constant policing of illicit activity in the family earned him the nickname “Noble Citizen.” Portia, despite her high intelligence, is viewed as intellectually inferior and teased about going to “dummy school” by her maternal grandparents. Often times the teasing bordered on cruel with a darkly comedic undertone; for example, the family began calling Anna “Anna-rexic” after she lost a lot of weight due to her cocaine habit. Though each of the children managed to live through the test of their resolve and survival skills, they’d have plenty to discuss with a courageous and willing therapist.

Told through alternating chapters of present day and flashbacks, Jessica Blau does an excellent job of seamlessly merging past and present using ingenius dialogue and provocative characters that are refreshingly original.

Drinking Closer to Home will elicit a gamut of emotions from outrage to tenderness and heartbreak to happiness—making you feel like part of the family.