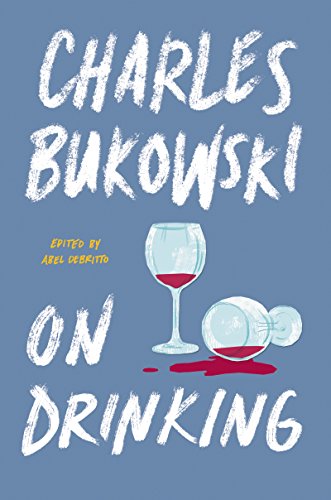 "Bukowski tells us: 'Drinking is a form of suicide where you’re allowed to return to life and begin all over the next day.'”

“some critics say I write the same thing over and over.

reason is that it feels so good, it’s like I’m making love to

Those lines encapsulate much of the negative criticism Bukowski received from the literary establishment, his remarkable self-awareness of that criticism, and his beloved addictions—writing and drinking—all spoken with that raw, lasting honesty that made him a great writer.

Many of us read Bukowski in our teens and twenties, experimenting, perhaps, with drinking and sex, maybe aspiring to be writers who could go all night at the typewriter or bottle. Bukowski’s voice somehow made his seedy misadventures completely believable and even profound in the way they revealed the vulgar and radiant life of a “loser.” He heroically lost at the American game of respectability, money, looks and a nice family.

Bukowski died in 1994 at the age of 73 from leukemia. Increasing interest in his work suggests there is more to this maverick than wine stains on the carpet. On Drinking is a superbly edited, illustrated anthology of poetry, prose, interviews, and letters from an important American voice.

The writing swerves over winding roads, driven by both Bukowski, and his semi-autobiographical persona, Henry Chinaski, recounting colorful, hilarious, tender and tragic anecdotes, including those childhood moments of discovering alcohol. In an excerpt from the novel, Ham on Rye, Henry recalls going home with a boy he didn’t like, meeting his father who had been “a successful surgeon, but he had lost his license because he was drunk,” and tapping into the family wine cellar.

And so begins the journey from the skid row days of extreme drinking that temporarily snuffed his writing: “I stopped writing. I concentrated on drinking. My longest stays were in Philly. I would get up early in the morning and go to a bar there and I would close that bar at night. How I made it, I don’t know.”

Back in Los Angeles the abuse led to a near fatal bleeding ulcer treated at a “charity hospital” where he is visited by a drunk girlfriend and his father. “The old man gave me a lot of lip and the whore was nasty too.” Bukowski nonetheless endures, eases back into drinking, writes furiously and produces a spirited poem like “beerbottle,” first published in 1964.

my beerbottle flipped over backwards

and landed on its bottom on the floor,

The poet pivots from the incident’s simple details to contemplating an aleatory universe:

we know nothing of, all manner of nudges

set us to burning or freezing; what sets

the blackbird in the cat’s mouth

The elements of chance and luck run through the writing of Bukowski, an inveterate gambler who loved horseracing. But as in the gritty lyrics of Tom Waits, there’s also a sense that winning simply means getting out of bed and facing another crazy day. Like many of the Beats, Bukowski saw phoniness, shallowness, and self-congratulating delusion in mainstream society. It’s often the down-and-out bum, free from social pressures, that offers a better glimpse into the truth of being human.

“let me tell you

I have drank in skidrow rooms with

whose cause was better

whose eyes still held some light

whose voices retained some sensibility,

and when the morning came

we were sick but not ill,

poor but not deluded,

and we stretched in our beds and rose

in the late afternoons

But not every poem is a winner. Bukowski cranked-out a lot of work, and some narratives, like a night of boozing, don’t say much in the morning. This begs the constant question about the relationship between drinking and creativity.

In a 1974 interview with London Magazine, Bukowski explains, “I don’t always write drunk . . . It’s hard to write prose when you’re drinking . . . It doesn’t work for me.” But you can “start drinking and write poems all night. You find them on the floor in the morning. You take out all the bad lines, and you have poems.”

In a 1983 discussion with Tom Russell, however, Bukowski claims, “One hundred percent of my work was (is) written while drunk and drinking. It loosens the air, puts some gamble into the word. I don’t think drink destroys writers. I think they are destroyed by self-satisfaction, the god dammed ego.” And though Bukowski encouraged young writers toward drinking and classical music to evoke the muse, he warns in a 1986 interview, “drinking doesn’t create anything. It’s destructive to most people. Not me, you understand, but to most people.”

Bukowski can have a very honest narrative voice and still have a confused sense of the truth or what he feels at different moments in his life. As what Time magazine once called the “laureate of American lowlife,” he may find human dignity and defiant triumph in the derelict drunk, but he never romanticizes away the ugliness. The truth of drinking speaks most clearly through those brutal accounts of reckless drunk driving, domestic abuse, terrible falls and fights—even punching a Zen priest at a wedding—and the disgusting and fatal realities of people sick and lost—“all of my drinking partners dead.”

He talks about his declining health, attempts at drying out, his shift away from hard liquor to decent white wine, even sobriety. In 1992 letter to his publisher, John Martin, Bukowski reports, “Sober tonight. I think I write as well sober as drunk. Took me a long time to find that out.”

Several times in his writing, Bukowski tells us: “Drinking is a form of suicide where you’re allowed to return to life and begin all over the next day.” He believed drinking gave a person another and different existence. “And that’s usually in my other life, my drinking life, that I do my writing. So, since I’ve been lucky with the writing, I’ve decided drink is very good for me.” And maybe, in moderation, for we readers, too. Cheers.