Dressing Up: The Women Who Influenced French Fashion 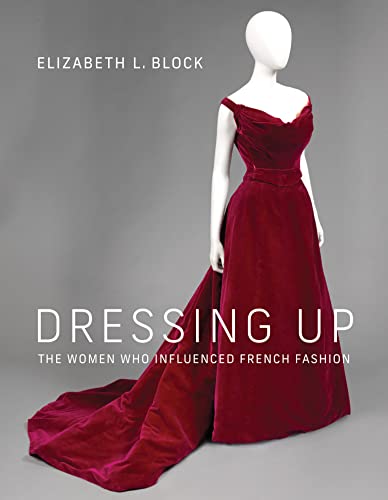 Elizabeth Block has written about fashion with a decidedly unique perspective. Dressing Up: The Women Who Influenced French Fashion might be a bit misleading as Block’s telling focuses on the 18th and 19th century and not a full-scale chronicle as the title might insinuate. Her research has unearthed an almost encyclopedic history of French fashion that includes names that even the most informed reader might not have ever heard of, read about, or even recognize.

This is no light fashion romp; this is nearly a textbook that has been meticulously researched and annotated. This reader, while very much into fashion, is not a history buff to this degree, and therefore found the book an extremely slow read. Yes, she proffers this unique point of view that will educate the most dedicated fashion reader, but it is all the minutiae and tangents that separate this book from others of this genre.

Block’s examination of this highly specified time span is guaranteed to pique the interest of any fashion reader, especially those specifically steeped in the history part of fashion, but it also strays into areas which might be considered peripheral and far too much of a dissection of this era. What was most shocking is that she unearths a designer that this reader has never even read about and would think neither has any other addicted fashion reader.

Writes Amy de la Haye, London College of Fashion, about the book, “A long overdue study of maison Félix, nuanced critique of the relationship between Parisian haute couture and coiffure industries, new reading of the assertive role of US clients and the architectural spaces they occupied, and detailed interpretation of fashion at the 1900 Paris Exposition are among the many reasons this meticulously researched and beautifully written book makes a major contribution to late 19th century studies.”

The above critique should give the prospective reader a glimpse into just how deeply Block has delved. The real question here is who is the target reader?