The Dreidel that Wouldn't Spin: A Toyshop Tale of Hanukkah 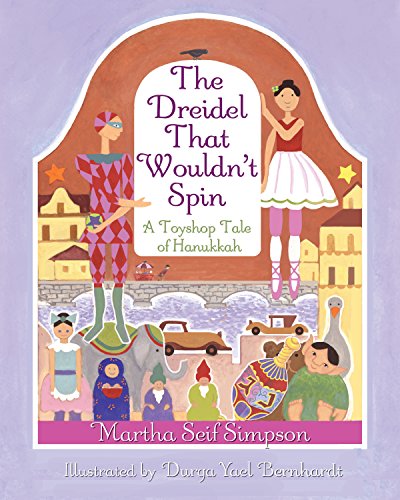 "It was the most beautiful dreidel the shopkeeper had ever seen . . ." but it wouldn't spin for just anybody.

There are some messages that just never get old. And the message in The Dreidel that Wouldn't Spin is twofold: first, that money is not everything; the second, that a true heart can work miracles.

A peddler brings an exquisitely crafted dreidel to a shopkeeper to sell. "It was the most beautiful dreidel the shopkeeper had ever seen. The Hebrew letters Nun, Gimmel, Hay, and Shin glistened against the brightly painted colors on four sides. . . . handpainted on the finest wood. This is one of a kind." The shopkeeper, ever eager to turn a profit, decides to take it. He puts it in the shop window on display.

And here's where the story feels very much like Roald Dahl's Charlie and the Chocolate Factory. A spoiled little girl, much like Veruca Salt, races through the toyshop and piles toy upon toy on the counter. She sees the dreidel last and insists on having it, too. Her indulgent father pays for all the items and leaves. But the next day the girl and her father are back, demanding a reutrn of their money because the dreidel will not spin. The shopkeeper tries it out. It spins for him. But inexplicably, it will not spin for the spoiled little girl. The shopkeeper takes it back.

Then into the toyshop comes a child, much like Augustus Gloop of Charlie and the Chocolate Factory, an overfed, greedy child who wants the dreidel because it is "much bigger than my other dreidels." He demands that his mother purchase it for him and she does. But sure enough, the next day the boy and his mother are back, claiming that the dreidel will not spin. Again the shopkeeper tests it out. Again it works for him. But not for the boy. He takes it back, embarrassed and even more puzzled. But this time, he is taking no more chances.

The dreidel must be defective somehow, so he removes the price tag and hides it away.

Then outside the toyshop window a child and his father look longingly at all the glittering toys, much the way sweet Charlie Bucket gazed longingly into the candy shop at the coveted Wonka Bars and other mouthwatering treats, unable to afford anything but unable to pull himself away either. The boy and his father ask permission to enter, look around, and then turn to the shopkeeper. "Thank you, kind sir, for allowing us into your wonderful store. May you be blessed by the miracle of Hanukkah."

The shopkeeper is touched. So moved is he by the boy, who seems innately to understand what is truly precious, that he asks the child to take the beautiful dreidel off his hands as a favor. And what do you think happens when the boy accepts and decides to try it out?

As in Charlie and the Chocolate Factory, miracles happen to those who are pure of heart. The Dreidle that Wouldn't Spin is a feel-good story that families will be able to share and enjoy year after year. It perfectly encapsulates the message of this minor holiday. The illustrations by Durga Yael Bernhard complement and capture utterly the text throughout, with lots of spot art to keep the child engaged while the story develops.

The end of the book offers a truncated but effective explanation of the origins of the Hanukkah miracle as well as information about dreidels, what the Hebrew letters mean, and how to play the dreidel game. One of the best Hanukkah books to come out in years. Like the magical dreidel in the story, The Dreidel that Wouldn't Spin is a treasure.