Dreaming in French: A Novel 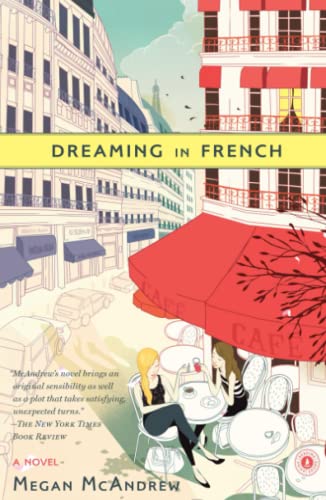 ". . . examines the intersection of the development of personal identity with cultural identity and even political identity."

After becoming disillusioned with graduate school and literary theory, Charlotte, the narrator of Dreaming in French, declares, “I remembered with a sharp pang that real sensations had once mattered to me. . . , and suddenly it came back to me why I had always loved. . . . Dead White Men it had become fashionable to mock: because they possessed the magical quality of real writers to summon worlds—worlds full of people you actually cared about, as opposed to the ambivalent wraiths of postmodern literature.” Summoning a world full of real people one cares about is precisely what Megan McAndrew achieves in her thoroughly readable, smart novel, Dreaming in French.

McAndrew’s novel is a coming-of-age story set mostly in Paris and New York from 1979 to approximately the late 1980s. The precocious narrator, Charlotte Sanders, describes her experiences growing up in Paris with her pragmatic sister Lea and her American expatriate parents: Frank, her reserved, intellectual father and Astrid, her free-spirited, eccentric mother. From the members of Charlotte’s immediate family to the secondary characters inhabiting the novel, McAndrew develops complex, interesting, believable people and, for the most part, avoids creating stereotypes. She also does an outstanding job of evoking an urban girlhood and is spot on in describing many of the locations, trends, and expressions of that time period.

The voices of McAndrew’s characters, and particularly that of Charlotte, are well constructed and credible. Charlotte begins her narrative: “Astrid became a Marxist after it stopped being fashionable, even in France, but fashion, as she always told us, was for people without imagination. How a mother who shopped at Sonia Rykiel could have discovered within herself a sudden solidarity with the working classes was a matter for some perplexity, though not on the part of Lea, who expressed the view that our mother was unstable. At sixteen my older sister was cultivating cynicism.” The first few lines of the novel reflect the wry tone of much of the book and convey Charlotte’s critical eye and cleverness, as well as her attitude toward her mother and sister. In many ways, her opening words also capture the importance of Charlotte’s relationships with her mother, and to some degree, her sister, that are developed beautifully throughout the book.

McAndrew’s prose is clear, crisp, and highly engaging. Her keen observations, wit, humor, and depictions of domestic, social, and cultural settings are reminiscent of aspects of the works of Edith Wharton, Jane Austen, and Lorrie Moore. But her novel is not merely a coming-of-age tale or family drama. Rather, the novel examines the intersection of the development of personal identity with cultural identity and even political identity. McAndrew explores what it means to be an expatriate, French, and American. She also incorporates political intrigue and consciousness into her tale as Astrid, and then Charlotte, are affected by and become involved with the Polish Solidarity movement and the fall of Communist governments in other European countries.

Most of all, Dreaming in French follows Charlotte’s development and her connection to her mother. Charlotte’s narrative is a way of making sense of Astrid and figuring out who she is in relation to her mother. The novel is funny and engrossing enough to read on the beach or curled up in bed, but it also has enough depth and literary merit to be taught in high school, discussed, and analyzed. McAndrew deftly creates a work that is charming and reads easily but is in no way frivolous.