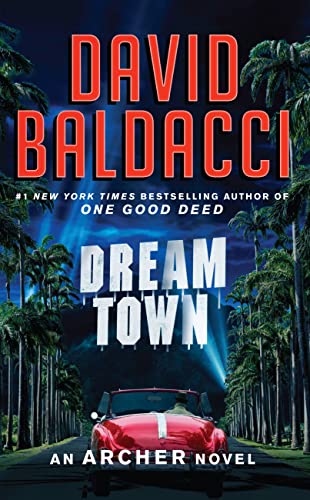 In David Baldacci’s third Archer adventure, Dream Town, the Pacific Coast Highway leads PI Aloysius Archer and his spiffy 1939 blood-red Delahaye convertible from Bay Town, California, to Hollywood. As if transported by a time machine, Baldacci immerses the readers to the 1950s, an era of flashy movies and movie stars like Kate Hepburn, Spencer Tracy, Marilyn Monroe, and Bette Davis. It is also the time of casting couches, adultery, kinky sex, blackmail, dope and booze abuse, and murder. As Archer quickly discovers, the glamorous yachts, movies, and galas are the tip of the iceberg that hides the seamier and steamier side of Hollywood.

It is New Year’s Eve 1952, and Archer is ringing in the New Year with his gal pal, actress Liberty Callahan, in the City of Angels. Before the stroke of midnight, Liberty’s friend Eleanor Lamb accosts Archer, claiming someone is trying to kill her, and she seeks his help. Archer is hesitant to accept the gig, but after receiving the go-ahead from his Bay Town boss, PI Willie Dash, he’s on the case in a big way.

The trouble is, shortly thereafter, Archer discovers a corpse in Lamb’s Malibu home. And she has disappeared. Are the dead man and Lamb connected? And as a stranger in town, where does Archer begin his investigation?

Since Lamb is an esteemed Hollywood screenwriter, Archer heads to the offices of the production company for Lamb’s latest film. There he encounters Cecily Ransome, a prestigious filmmaker, who agrees to post Archer’s fee to locate her colleague. The search leads Archer to the lush mansions of Hollywood, the sleazy bars of Chinatown, the gambling palaces of Vegas, and the remote shores of Lake Tahoe. His is a rambling journey, where everyone within Tinsel Town’s intimate circle has secrets to protect, making it nearly impossible for Archer to track down his missing client.

Archer quickly learns that while the men appear to be running the film industry, it is their wives who are pulling the strings. Four women in particular: Alice Jacoby, a talented set designer, sexy Gloria Mars, a producer’s wife, Mallory Green, a jaded Oscar-winning producer, and Bernadette Bonham, a neighbor and old friend of Lamb’s, could all be suspects. These ambitious ladies know more about Lamb, her past and present, than they are letting on.

Despite wealth and fame, everyone interviewed by Archer seems to hide a secret pain, a longing for a simpler existence. Archer is a Boy Scout; good, kind, and intuitive. His experiences in the infantry during World War II have fine-tuned his abilities to discover the humanity hidden in the pain, and to keep him on track when the investigation gets out of control, endangering his life, Liberty’s, and Willie’s.

The plot of Dream Town is as windy as the narrow curves of the Hollywood Hills that Archer navigates in his Delahaye. Baldacci captures the dark underbelly of Hollywood’s Golden Age by creating a mystery so chock full of juicy leads and supporting cast members that readers need a scorecard to keep them straight. But that is half of the fun. As Archer collects bumps on his head, and the bullets fly, villains, drug lords, crooked cops, and smugglers are lurking around every turn. Baldacci keeps piling on the tension until the last chapters, when Archer finally pieces together the shocking puzzle of Lamb’s disappearance and the decadence that is Hollywood.

After Archer solves the crimes, two delicious mysteries remain in Dream Town. Will Archer and Liberty finally become a couple? And will Archer ditch the Willie Dash Agency in Bay Town and strike out on his own in Tinsel Town? Readers will have to wait for the next electrifying installment of the adventures of Alyosius Archer for the answer.