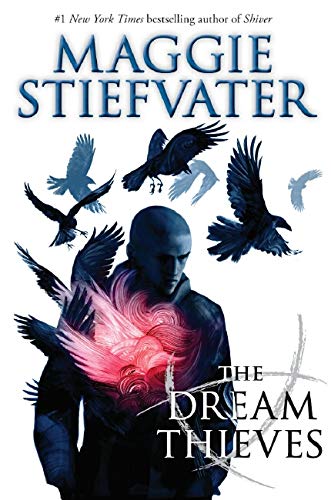 “Ms. Stiefvater is at the top of her craft in The Dream Thieves.”

In this second of a planned quartet, Maggie Stiefvater again delivers a mesmerizing story populated with the unique cadre of unconventional characters she introduced in The Raven Boys.

The raven boys themselves number three—or four—depending on how you count them. There’s Gansey, a good-looking preppie boy from old money whose only wish is to discover the legendary Welsh king, Glendower, said to sleep along the ley line—a supernatural energy path—that slashes through their town of Henrietta, Virginia.

Adam, the scholarship boy, who escaped an abusive home life to attend the exclusive Aglionby Academy, clings to his friends as he fiercely defends his independence by trying to hold down three jobs.

Ronan, also from money, but dark money, mysterious money derived from an impossible supernatural secret he shares with his late father.

And Noah, a nearly-solid ghost energized after his bones are buried on the ley line. He has a disturbing habit of re-enacting his own violent death.

Blue, the small-town girl who tries to keep the peace and hold them all together, lives in a house filled with psychic female relatives. She herself claims no such ability, but others’ powers grow stronger in her presence. Her family foretells that when she kisses her true love he will die. She is determined to kiss no boy. Ever. Especially not Gansey or Adam.

The group faces new dangers in this sequel as they continue to seek Glendower and the promise of the great reward the king will bestow when awoken. The Gray Man, under orders of Greenmantle, arrives in town to search for an unknown item called a Greywarren that seems linked to Ronan and his family. The Gray Man is falling for Blue’s mother even as he carves a bloody path through Henrietta in his search for the Greywarren.

Early on Ronan’s newly recognized power becomes apparent: he can bring real objects from his dreams into the world—a Rosetta stone of a puzzle box; a raven called Chainsaw that seldom leaves Ronan’s side. And sometimes, things escape from Ronan’s nightmarish dreams into reality, horrible things made of claws and scales and hisses, things intent on killing him. The nebulous partition between waking and dreaming slowly crumbles for Ronan, taking the reader spiraling down with him.

Not only is the pace perfect and the action spot-on, the relationships between Blue and the boys are unexpected, unlike those found in other YA paranormal stories. The characters love each other. They hate each other. They cannot exist without each other.

Ms. Stiefvater is at the top of her craft in The Dream Thieves. She has the uncanny ability to turn what could be stereotypical characters in lesser hands into a group of eccentric young people who captivate, engage, and yes, even break the reader’s heart at times. She creates a moody, nuanced world that is both astonishing and unforgettable.