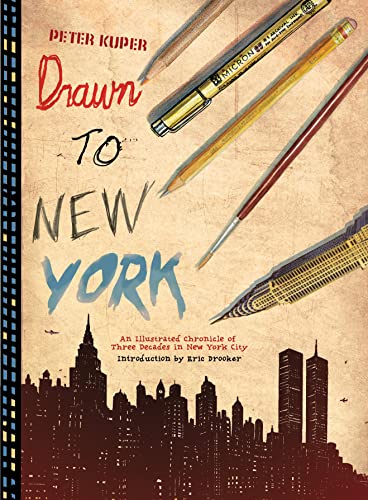 Working in a variety of formats from watercolor to ink to paint, collage and pencils, Peter Kuper creates a deep, brilliant, beautiful, and colorful history of his time in New York City. The stories ring with humor, insight and tragedy.

On one page he speaks of both the abandoned and the well-off while on the next page addresses a dancing and a street fair. The wide variety of the city is perfectly captured on every page.

As an artist and writer Mr. Kuper’s ability to shift shapes and perspective, often within the same story, is amazing. His work can bring you to a sudden stop of self-awareness and then leave you laughing your bottom off. Anchoring this look at NYC is the way he moves so effortlessly between watercolors to pencils or collage and then into a comic-style short story. His approach to his art is as varied as the people and buildings he writes and draws.

Adapting Jonathan Swift’s A Modest Proposal into the modern era he illustrates the century’s old essay on society’s inability to care for it’s young in inks that hold deep and threatening shadows. The style resembles aged woodcut drawings.

In one two-page story he access multiple ideas and multiple styles making each part of the equation as relevant and modern as it originally was in Swift’s day.
This isn’t the only time that he is able to utilize seemingly conflicting ideas or styles and bring them into a wonderfully coherent whole. Using simple, inked lines Mr. Kuper shows us the upper third of a man who stands equal to the towering rooftops around him.

The shortness of the lines gives the impression that both he and his environment are almost made of wicker. His head clearly sits apart from the buildings around him while at the same time his body seems to be part of those very buildings.

The combination subtly reminds us that the city, as much brick mortar and cement as anything else, is also built of the people who live there. To the right of the body, in an area where the heart would normally sit, is an open window. The blind is raised to reveal a man sitting with his hands under his chin. Like the wicker man, there is a duality to this image.

The appearance of the man in the window suggests that he looking out over the city in front of him. There is also the idea that he is staring straight out at the reader as if you are on display as much as he is.

There is a yellow light behind him. This is the only color beside the darkness of the lines. It seems to silhouette the loneliness that exists while surrounded by eight million other people.

In another piece the motif of incorporating buildings and human beings into one appears with a different point of reference.

This time the perspective pulls back from the island of Manhattan. We see the skyline and a couple of bridges on the right.

At the very top of the buildings are block-type humans. They each bear straight, square jaws while wearing much smaller buildings or chimneys as hats. One smokes a cigar as he reaches down toward a bridge. The others are obviously having fun as they rearrange the skyline below them.

These are the giants of industry, the leaders of the city at work. The drawing also illustrates Mr. Kuper's skills as the colorist of his own work. The orange of the sky both frames and magnifies the fiery hubris the giants below them as the calm blue of the water that surrounds the port anchors the scene. It is as if the blue of heaven has switched with the pits of hell.

In the previously mentioned narrative "Off the Beaten Path" he creates shadows and uses darkness in such a way that you begin to feel as intoxicated as the folks in the story.

There is brilliance in the way he uses silence to tell many of his stories. In “One Dollar” he brings us the life of a single piece of currency. We watch that single bill moving from birth at the paper mill to its final resting place in a sewer. Without a word passing over the course of eight pages we see more of the city than you can possibly imagine.

In “Stars and Stripes,” possibly the most heartbreaking piece in the book, he begins with the image a plane approaching the twin towers. In brilliant red he shows the after effect of the explosion.

Across four exact panels in a line and seven lines total, he travels from the towers to the eye of a person half way across the world cradling a dead child. Inside his eye the original image of the towers appears. The final panel duplicates the exact same one that started the story.

The circular aspect of the story reminds us that no matter what we want to believe, the war at the root of the story is an age old one that will come back around again. The implication is also that we may a lot more responsible for what happened than we care to admit. A heretical idea to some, but one that needs to be acknowledged and addressed just the same.

The great artists entertain us and they amaze us with their gifted and studied skills, but they also challenge us and make us think. Mr. Kuper has given us biography, history, life, art, and just such a challenge inside this stunning thank you to the city that he calls home.

Don’t mistake this for a coffee table art book. It is a story of home, life, people and ideas that you will return to often.