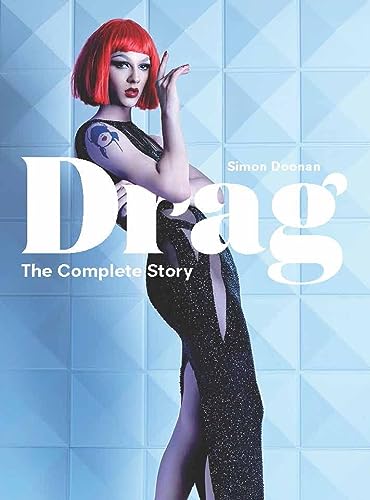 “You come for the glamorous pictures and stay for the sizzling prose. Doonan writes like an angel with a sword: beautifully and provocatively.”

Boys will be boys and girls will be girls, except when they cross-dress, morph into one another, and deconstruct the socially constructed and often arbitrary roles that divide masculine from feminine, so-called “straights” from so-called “gays” and “queers” from the rest of the pack.

It’s hard not to use quotation marks when writing about a subject as thorny as drag. Aren’t we all on a continuum, rather than in separate categories?

That’s what “drag” historian, Simon Doonan, suggests. He also implies that the French language can be more nuanced than English when talking and thinking about gender. Indeed, there are indispensible French words like garçonne, gamin and “le chien,” which is used, he says, to describe an “edgy,” “haughty” woman.

English words like “fag” and “faggot” sound so ugly. The prejudice behind them is ugly, too.Every subculture has its own lingo, whether it’s the drag subculture or the drug culture, and sooner or later the subterranean lingo moves into the mainstream. That’s part of the fascinating story that Doonan tells.

His new, beautiful book takes readers on a wild and colorful ride through the annals of what’s come to be known as “drag,” and that includes the world of sex change operations, transvestites, transsexuals, “cis females” and gender bending every which way.

Hey what’s not to like! Kick back and enjoy the show! Audiences have been doing just that for more than 100 years.

Though Drag calls itself the “complete story” it is not that. It focuses mostly on the public face of drag: movie stars, rock stars, and performers on stage. It does not bring to light the world of drag that exists in working class neighborhoods in New York, Paris, London, and elsewhere, and even in Mexican villages such as Juchitan where men dress as women and parade in the streets on special occasions.

Drag is everywhere, and it’s not going to go away. Noonan is right about that. Is he right when he suggests that “misandry”— prejudice against men— is on the rise? Perhaps it is.Yes, there’s a revulsion against machismo, and in some families women wear the pants, but patriarchy is still alive and well in the White House and reruns of most episodes of Little House on the Prairie.

Readers who dive into Drag will not be disappointed. The images—there are 210—are striking and the text—240 pages—is stimulating.

Together, the images and the text form an exciting package that entertains the eye and delights the mind.

You come for the glamorous pictures and stay for the sizzling prose. Doonan writes like an angel with a sword: beautifully and provocatively.

Not until he was 61 was same-sex marriage legalized in the country St. Patrick supposedly rid of snakes, but where censorship lasted for centuries and where books like Drag would have been banned.

The world, as Doonan makes clear, has been slow to accept cross dressing in public, though men have been dressing as women and then disguising themselves as men on stage as long ago as the days of Shakespeare.

Men playing women playing men: that’s complicated. Indeed, it’s a complicated story that Doonan tells, though he tells it simply and elegantly and allows that drag can be a “visual assault” that’s ferocious, beautiful, funny and therapeutic, too.

Many, though not all of the images in Drag, are of famous people: Mick Jagger, David Bowie, Marlene Dietrich, Andy Warhol, Divine, and Tilda Swinton, whom the author calls the “reigning queen of cinematic androgyny.” There’s also, in a chapter titled “Radical Drag,” a full-page image of Meryl Streep in drag and impersonating Donald Trump.

“The Trump presidency has proven to be a red rag to a drag king,” Doonan writes. “Drag is getting under the president’s skin.”

One of the joys of the book is that it explores the elasticity of drag and its ability to transcend literal and figurative boundaries. Drag might invite intrepid readers to cross dress.

For those who are perfectly happy with the clothes they wear and how they identify in terms of sex and gender, Drag invites readers to watch Tony Curtis and Jack Lemmon in Some Like It Hot (1959), Billy Wilder’s brilliant comedy with Marilyn Monroe that hasn’t lost its charm or its punch 60 years after it first appeared on screen and helped set the stage for the gender bending Sixties.

Who doesn’t like it hot? Really, no one Doonan would say.